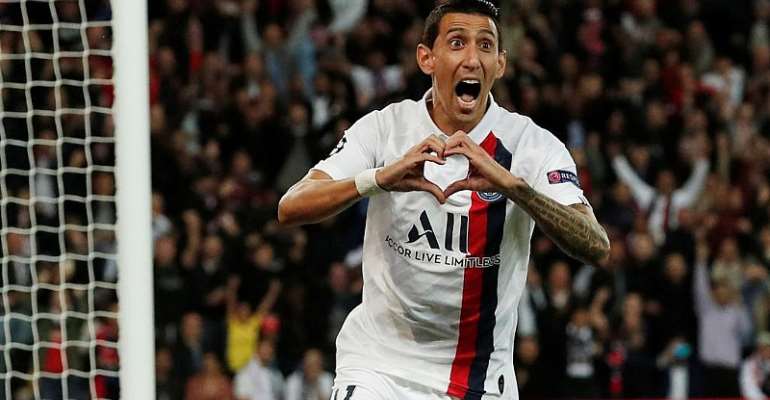 In the absences of Neymar and Kylian Mbappe, Angel Di Maria stepped up to lead Paris Saint Germain to an easy 3-0 victory over Real Madrid on Wednesday, scoring twice. Thomas Meunier added the third late on summing up Real's forlorn night.

No Neymar, no Mbappe, no Cavani but Paris St-Germain proved Wednesday that they still have others capable of winning big games.

Di Maria--hailed as exceptional--beat Real goalkeeper Thibaut Courtois at his near post to put PSG ahead in the 14th minute at the Parc des Princes, but it was his second goal just after the half-hour that really lit up this encounter.

The Argentine, who starred for Real for four years and won the Champions League with them in 2014 before moving to Manchester United, gave Courtois no chance with a left-footed shot from 20 yards out that arrowed into the corner.

"He was exceptional tonight. He is always dangerous," PSG coach Thomas Tuchel told reporters after the match.

"Everyone was saying how could we win with all these players out but maybe that meant we were not the favourites and it can also help when you don't feel too much pressure," Tuchel added.

Tough job ahead
Real remain far from convincing since Zinedine Zidane's return for a second spell as coach of the 13-time European Cup winners.

"They were superior to us in everything they did, and in intensity, which annoys me the most," said the Real coach.

"PSG are a good team and created lots of chances but what worries me is that my team played without any intensity," Zidane lamented as his team failed to muster a shot on target.

Real, the 13-time European champions, are still favourites to advance from a section that includes Club Brugge and Galatasaray, who drew 0-0 in Belgium, but the nature of the loss underscored the work that lies ahead for coach Zinedine Zidane.