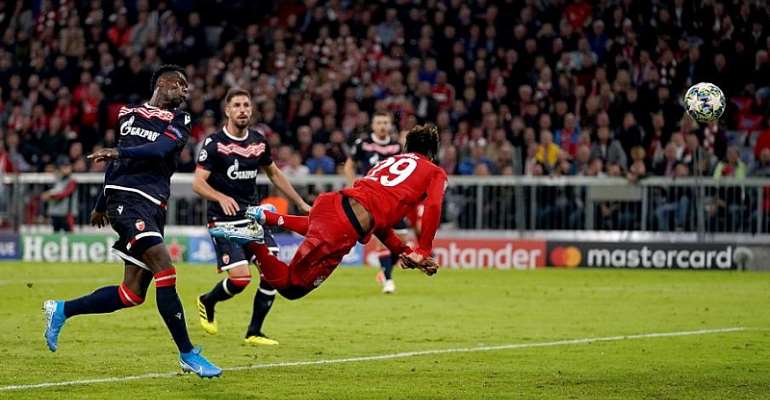 Robert Lewandowski scored as Bayern Munich eased to a 3-0 win over Red Star Belgrade in their opening Champions League group-stage match at the Allianz Arena on Wednesday.

Bayern visit last season's runners-up Tottenham, who blew a two-goal lead on Wednesday in a 2-2 draw at Olympiakos, in their second Group B game in two weeks' time.

The hosts were stuttering to a slender win before Lewandowski capitalised on two mistakes in the Red Star defence for a classic poacher's goal.

"We had the whole game under control, we just scored too few goals," Lewandowski told Sky.

"I'm very happy that I scored and that we played well as a team."

The margin of victory will please Bayern head coach Niko Kovac after his side peppered the Serbian team's defence and enjoyed a huge share of possession.

The German champions are not having things their own way so far in the Bundesliga and Saturday's 1-1 draw at early leaders RB Leipzig left Bayern fourth in the table, two points adrift.

However, they remain a force to be reckoned with and last lost a Champions League home game in December 2013.

It took just over half an hour for them to take the lead, capitalising on 70 per cent possession.

With the away defence hanging back, understandably worrying about Lewandowski, Coman slipped his marker and headed home from fellow winger Ivan Perisic's pin-point cross from the left flank on 34 minutes.

It could have been 2-0 going into the break as Philippe Coutinho, on loan from Barcelona, audaciously flicked the ball into the net with his heel, but was narrowly offside.

Lewandowski squandered an open goal, firing over with an extravagant volley rather than a simple tap-in, with an hour gone just after Perisic had hit the crossbar.

Marin caused nervous looks in the Bayern defence when he fired wide of the diving Neuer, and the post, before Lewandowski struck.

Substitute Mueller showed his class, having replaced Coutinho, when he fired home a floated Thiago Alcantara free-kick for the best goal of the night in injury-time.