UCL: City Put aside domestic slip with win at Shakhtar 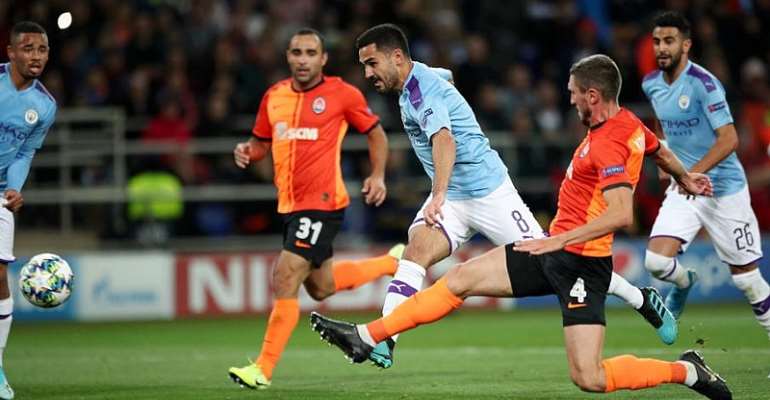 Pep Guardiola insisted he never doubted Manchester City could cope with their defensive injury crisis as his side made a flying start to the Champions League campaign with a 3-0 win against Shakhtar Donetsk on Wednesday.

But Fernandinho slotted in comfortably at the back as City easily subdued Shakhtar with first-half goals from Riyad Mahrez and Ilkay Gundogan at the Metalist Stadium.

Gabriel Jesus netted City's third goal in the closing stages to ensure they made the long flight home with three points stowed away.

"When you win the manager makes the right decisions, when you lose the wrong decisions. We lost one game in eight months and we will not doubt who these players are. It is a joy to be their manager," Guardiola said.

"We defended really well and created chances. We don't have many choices in defence.

"Fernandinho's the only one I have. He is a clever player and so intelligent and an incredible guy.

"He has a lot of experience and personality and what he says the people follow him in the locker room. He's important."

Fernandinho added: "I've been training in this position since the start of the season. Pep knows all about our squad and team. Today was my opportunity and I hope I can improve more."

There was more good news for Guardiola as French defender Benjamin Mendy, on as a late substitute, made his first appearance since April after returning from a knee injury.

With Dinamo Zagreb and Atalanta making up Champions League Group C, City are expected to cruise into the last 16.

This mature performance was the perfect opening to their bid to win the Champions League for the first time, especially coming after Saturday's shock 3-2 defeat at Norwich in the Premier League.

"Three points away are so important. Now it's in our hands. If we can close the games at home then we will be in the last 16," Guardiola said.

City have failed to get past the quarterfinals in Guardiola's previous three seasons in charge, while the Spaniard hasn't won the tournament since the second of his two titles with Barcelona in 2011.

Those past failures gave extra significance to City's opening match.

Nicolas Otamendi is the English champions' only fit centre-back, so Fernandinho was pressed into action, with Guardiola giving the Brazilian the captain's armband for his first start this season.

The 34-year-old had lost his place as City's holding midfielder following the pre-season signing of Rodri from Atletico Madrid.

EMPHATIC RESPONSE
Rodri wasted a chance to put City in front inside the first minute when he met Kevin De Bruyne's free-kick with a misdirected header inside the six-yard box.

City were dominating possession without testing Shakhtar keeper Andriy Pyatov and Jesus's shot deflected for a corner after the Brazilian was teed up by Gundogan's clever pass.

Their pressure was rewarded in the 24th minute when Jesus flicked the ball back to Gundogan on the edge of the area.

Gundogan's curling strike cannoned back off a post into the path of Mahrez, who had the simple task of slotting into the net from close range for his first goal of the season.

It took 35 minutes for Shakhtar to muster their first shot on target when Junior Moraes had a close-range effort well saved at the near post by Ederson.

City's response was emphatic and they doubled their lead in the 38th minute.

Mahrez was the provider this time with an incisive surge towards the Shakhtar area.

The Algerian deftly picked out Gundogan's run and he finished with a clinical strike that flashed past Pyatov.

Jesus wrapped up the points in the 76th minute when he slotted home from De Bruyne's pass for his second goal of the season.