Real Madrid Failed To Have A Shot On Target Against PSG 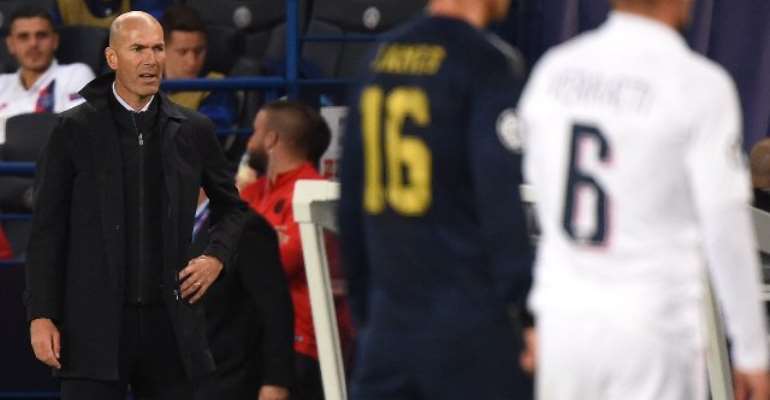 Zinedine Zidane has not had a good time since returning to Real Madrid.

The French manager was meant to transform the club's fortunes when he returned in March.

However, he's had a bit of a nightmare. Prior to Wednesday night's game against Paris Saint-Germain, Zidane had won just seven of his 15 games since being re-appointed as manager.

And that became seven in 16 as they were hammered by the French giants.

Angel Di Maria returned to his old stomping ground by notching twice in the first half.

His first came after just 14 minutes as he fired past Thibaut Courtois at the near post.

He made it two 20 minutes later with a lovely strike from outside the box.

And Thomas Meunier popped up in stoppage time to give his side a comfortable victory.

In truth, Los Blancos never looked like getting back into the game.

They did actually have the ball in the back of the net through Gareth Bale, but his quite extraordinary effort from outside the box was disallowed by VAR after a handball in the build-up.

Aside from that strike from Bale, Real Madrid had 10 shots at goal but none were on target.

That means Keylor Navas was not tested at all against his former club.

And an incredible stat has emerged on the back of the that.

According to Spanish journalist @2010MisterChip, that was the first time Real Madrid have failed to have a shot on target in 578 games.

The last time they didn't manage to accrue a single shot on target came a decade ago.

According to Opta, It's also the first time they have failed to test the opposition goalkeeper in the Champions League for the first time since 2003/04, a run that stretches 167 games.

Wow. That is just not good enough.
For a side that features the likes of Gareth Bale, Eden Hazard and Karim Benzema, that is extremely alarming.

Real Madrid have serious problems and they need to address them. Fast.

LGBTQI+ debate: Be tolerant of each others views — Akufo-Add...
52 minutes ago