Barkley: I'm Chelsea's Penalty Taker And I'll Take The Next One 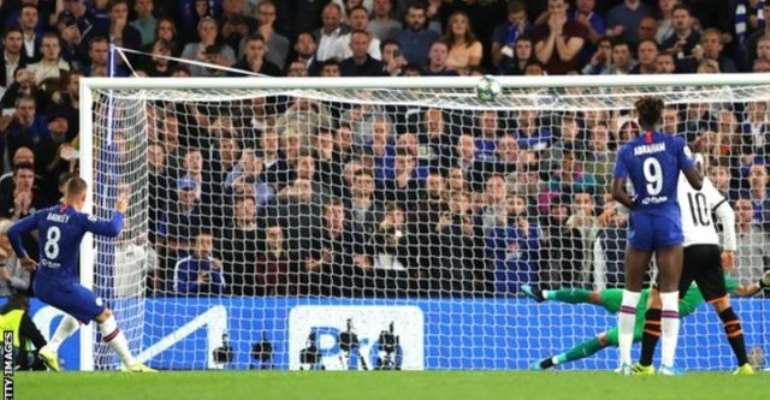 Ross Barkley says he is Chelsea's designated penalty taker and insists he will take the next one the club are awarded despite his 87th-minute miss against Valencia on Tuesday.

Willian, Jorginho and Tammy Abraham were all in discussion with Barkley after the referee checked with VAR to give a penalty for a handball by Daniel Wass late on in the defeat to the Spanish side.

Rodrigo's 74th-minute goal proved the difference at Stamford Bridge and England midfielder Barkley has insisted he will take another one despite blazing his spot-kick over the bar.

"When I’m on the pitch, I’ll take the penalty," he told reporters. "Obviously I didn’t execute it right but everybody misses penalties. I didn’t score the goal but I felt confident. If there was another penalty in the game, I would have been confident to take it.

"You can miss penalties. It’s not the end of the world. We’ve got five more games in the group stage that we're aiming to win but this didn’t go our way."

Barkley has taken five other penalties during his time at Chelsea across penalty-shootouts and during matches.

However, Jorginho is the only Blues player to score from the spot in a competitive match this season after netting in the Super Cup final against Liverpool, with Barkley on the bench.

Willian and Abraham have also taken high-profile penalties in the past and Barkley has no hard feelings over the reaction of his team-mates before he stepped up.

"We’ve got a lot of good penalty-takers in the squad and on a sheet in the changing rooms it says I’m on penalties if I’m on the pitch," he added.

"Otherwise, it's Jorginho. But as with all players, sometimes you feel confident to take them on but we can all miss one.

"They are confident to take the penalties as well but I practice them every day. I don’t miss them in training and in pre-season, I scored penalties. I’ve missed penalties before when I was at Everton and it is one of those things. I’m gutted that I missed but these things happen.

"It [the conversations with his team-mates before the penalty] was more like 'good luck with the penalty' type of thing. They were encouraging me and would have been willing to take the penalty as well but I felt confident. It was a disappointing night all round. Our first game in the group stage, our first game at home as well, it was disappointing.

"Missing a penalty is not the end of the world for me. It is a disappointing result not coming away with the three points and disappointing for me not executing the penalty right. I felt confident that I would have but for me, it is to focus on the next game and to get three points at the weekend."

Chelsea will now turn their focus to a game against Liverpool on Sunday, with the Reds also suffering defeat in the Champions League as they lost 2-0 to Napoli at the Stadio San Paolo.