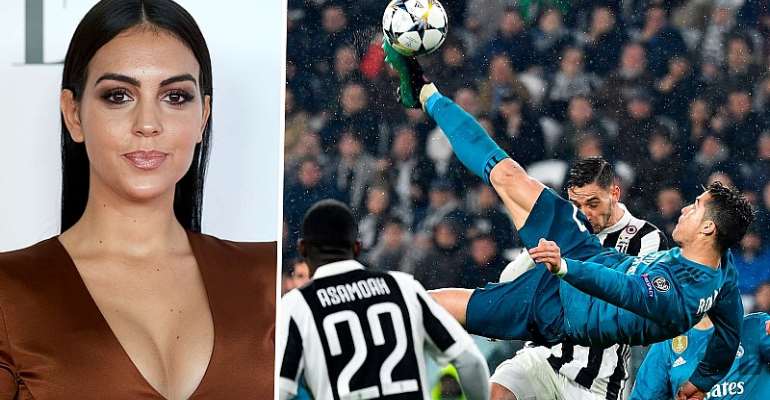 Cristiano Ronaldo has claimed sex with model girlfriend Georgina Rodriguez is superior to the best goal of his glittering football career.

The Juventus star revealed that his overhead kick for Real Madrid against his current side in April 2018 is his pick for his favourite goal ever, but it does not compare to being with his current partner.

Ronaldo connected with a cross from Dani Carvajal to score an incredible goal in the 2017-18 Champions League quarter-final first leg.

Upon seeing the goal, the home faithful in Turin gave Ronaldo a standing ovation, despite the Portugal star scoring for the visiting team.

That goal would help see Real Madrid past Juventus into the semi-finals, where they would overcome Bayern Munich before then beating Liverpool in the final for their third consecutive Champions League win.

Speaking to Piers Morgan in an interview on ITV , the 34-year-old has admitted the goal against the Old Lady was his favourite, but said he didn't rate it above his experiences with Rodriguez between the sheets.

"No, not [when compared] with my Geo, no!" Ronaldo said as he laughed at the question from Morgan.

"I tried to score this goal for many, many years," Ronaldo said. "I had scored 700-odd goals but I hadn’t done this. I thought, ‘Finally I had scored a bicycle, the beautiful jumping'.

“The way I had done against [Gianluigi] Buffon, against Juventus, in the Champions League. It was a beautiful goal.”

Ronaldo may not have known it at the time, but just months after scoring that goal he would be joining Juventus following a legendary nine-year run at Real Madrid.

The former Manchester United forward has said that the reception he received from Juve fans after scoring that goal helped to convince him to join the Serie A club.

"When the people start to applaud me in the stadium I was like, ‘Wow'," Ronaldo told DAZN last year.

"[It] surprised me a lot because this has never happened in my life, so [it] was [an] unbelievable moment."

Ronaldo scored 21 goals in Serie A in his first season with the club as Juventus won the league for the eighth consecutive year.

He has scored one goal in three league games in 2019-20 ahead of Juve's return to the Champions League on Wednesday against Atletico Madrid.

Ronaldo will be looking to help Juventus win their first Champions League crown since 1995-96, after the club fell to Ajax at the quarter-final stage last season.