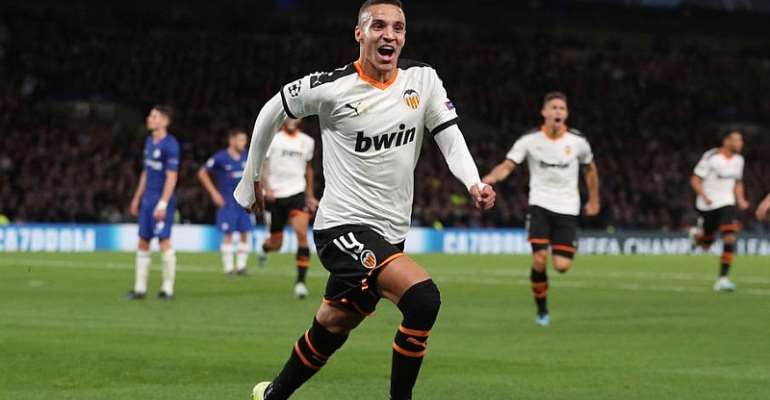 Valencia put a week of turmoil behind them to beat Chelsea 1-0 at Stamford Bridge in Frank Lampard's first Champions League game in charge of the Blues on Tuesday.

Chelsea dominated possession, but were toothless in attack after losing promising midfielder Mason Mount to an early injury and were punished 16 minutes from time when Rodrigo grabbed all three points for the Spaniards.

Lampard's men should still have rescued a point, but Ross Barkley fired a late penalty over the bar.

Valencia had arrived in London still reeling from the unpopular sacking of coach Marcelino last week, who had led the club to two top-four finishes in La Liga and the Copa del Rey last season in his two seasons in charge.

Los Che were also thrashed 5-2 by Barcelona in Albert Celades's first game in charge on Saturday but bounced back with a solid if unspectacular performance that was still good enough to beat a Chelsea side that badly missed the imagination of the departed Eden Hazard.

Lampard has had a rocky start on his return to Stamford Bridge but enjoyed his best result of his short time in charge with a 5-2 win at Wolves at the weekend.

Tammy Abraham scored a hat-trick in that match to take his tally to seven goals in his last three Premier League games and threatened to carry that form into his first Champions League appearance early on.

Abraham was denied by Jasper Cillessen as he tried to force home Cesar Azpilicueta's dangerous near-post cross inside the first 10 minutes, but Chelsea's early momentum was soon halted by an injury blow to the other young star of their season so far.

COQUELIN LUCKY
Francis Coquelin was lucky to escape with just a yellow card for a dangerous lunge on Mount, that forced the England international off with an ankle injury.

Without the creative quality of Mount, the hosts were reliant on moments of magic from Willian to open up an organised if unambitious Valencia.

The Brazilian just lacked the finish after chesting down Mateo Kovacic's fine pass over the top of the Valencia defence as he blazed well over.

Former Barca 'keeper Cillessen had been heavily criticised for his performance upon his return to the Camp Nou on Saturday but came to his side's rescue again in first-half stoppage time when this time a fierce volleyed effort from Willian found the target.

Despite Chelsea's obvious defensive weaknesses in conceding 11 times in their opening five Premier League games of the season, Valencia were happy to contain and counter-attack.

But the visitors made their mark from set-pieces.
Firstly, Kevin Gameiro fired over from a well-worked corner when picked out by Dani Parejo.

However, Rodrigo made no such mistake after another pinpoint delivery from a Parejo free-kick as his shot into the ground bounced up and beyond Kepa Arrizabalaga.

The goal arrived just seconds after Lampard had introduced a second striker in Olivier Giroud as he chased all three points.

Giroud fired too close to Cillessen moments later as Chelsea went in search of an equaliser.

And they were given a golden opportunity when Daniel Wass was harshly penalised for a handball after a lengthy delay for referee Cuneyt Cakir to consult replays four minutes from time.

However, no damage was done to Valencia as Barkley's penalty hit the bar on its way over to condemn Chelsea to the worst possible start in Group H.