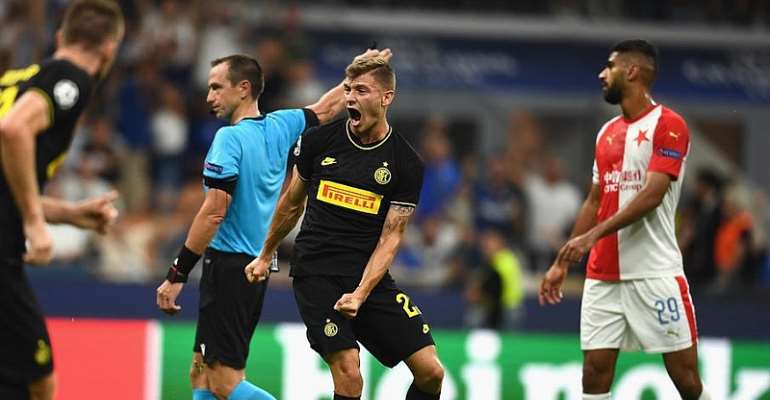 Substitute Nicolo Barella scored in added time to rescue a 1-1 draw for a disappointing Inter Milan in their Champions League opener against rank outsiders Slavia Prague on Tuesday.

It looked as though the Czech side would leave San Siro with all three points in the Group F clash after Nigerian forward Peter Olayinka put them ahead in the 63rd minute, only for Barella to level in the second of eight minutes of stoppage time.

Olayinka, who has previously played in Albania and Belgium, pounced to score in the 63rd minute after Inter goalkeeper Samir Handanovic had saved from Jaroslav Zeleny.

However, Inter equalised when a Stefano Sensi free-kick rattled off the bar and the ball came out to Barella, whose shot found the net with the aid of a deflection.

Slavia goalkeeper Ondrej Kolar then made a fine reaction save from a Romelu Lukaku header in the 97th minute, and a draw was the least the visitors deserved.

They are among the longest shots with bookmakers to win the Champions League in their first appearance in the group stage since 2007-08, and this result suits neither side in a section also featuring Barcelona and Borussia Dortmund.

Inter came into their Champions League campaign with optimism after winning their opening three games of the season in Serie A under new coach Antonio Conte.

However, they are now already at serious risk of exiting in the group stage for the second season running.

The other early kick-off on Tuesday saw Lyon come from behind to draw 1-1 at home to Russian champions Zenit Saint-Petersburg in France in Group G.

Iranian striker Sardar Azmoun gave Zenit the lead just before halftime after playing a one-two with strike partner Artem Dzyuba on the edge of the area.

The home side needed just five minutes of the second half to draw level, though, with Memphis Depay converting a penalty after he had been brought down by Magomed Ozdoev.

Benfica and RB Leipzig meet later in the same group in Lisbon.

Also on Tuesday, holders Liverpool kick off their campaign away to Napoli and Salzburg take on Genk in Group E, while Chelsea host Valencia and last season's semifinalists Ajax meet Lille in Group H.