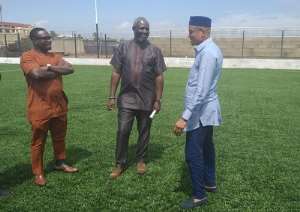 The Minister of Inner-City and Zongo Development, Dr Mustapha Abdul-Hamid has assured residents of Madina Zongo that a football pitch being constructed in their community meets the dimensions specified by FIFA and it would be fit to host Ghana Premier League matches.

The Minister shortly after a tour of the facility located at the Libya Quarters area of Madina told pressmen that the facility which measures 90 metres (length/touchline) x 62.5 metres (width/goal line) falls withing the FIFA certified range.

He said he had seen a viral social media video by some youth who allege that the pitch is not fit to host second division matches involving Madina United because it is not an 11-a-side football pitch.

"First of all, that is palpably false, that is not true. As you know by now, this is a FIFA certified pitch. FIFA has a minimum and maximum range for every pitch certified for competitive football matches and this pitch falls squarely withing the FIFA range," Dr Abdul-Hamid said.

He stated that the world football governing body FIFA has two specified dimensions for its standard of football pitches which measure a minimum of 90metres (length/touchline) x 45 metres (width/goal line) and a maximum of 120 metres x 90 metres).

"So, this pitch is a FIFA certified pitch, it qualifies for every kind of match that we want to play on it... All of the technical experts from the Ghana Football Association has certified that the pitch is a FIFA standard pitch and fit for purpose," he added.

He mentioned that the pitch which would seat 1,200 persons when it is completed by mid-October 2019 would host President Nana Addo Dankwa Akufo-Addo and two premier league teams when it is inaugurated.

Dr Abdul-Hamid who said he was demotivated to bring any more projects to Madina, accused the youth in the said viral video of being motivated by partisan interests hence their decision to criticise the project with misinformation.

He was accompanied on the tour by the Deputy Minister of Youth and Sports, Perry Curtis Kwabla Okudzeto and the project contractor Robert Tetteh Coleman, the CEO of Wembley Sports Complex.

However, some youth who were present during the tour of the project said they were shocked that they were being dragged into politics because they complained about the size of the pitch.

"It is painful that we are being dragged into NDC and NPP politics because we complained about the size of the pitch, why would we fight against a nice project because of politics?," a youth who gave his name as Alhaji Tanko said.

The Deputy Minister of Youth and Sports, Perry Curtis Kwabla Okudzeto maintained that the Sports Ministry had sent its own technical experts to inspect the pitch and they have certified that it is a FIFA standard facility.

He said the Madina pitch was a standard community pitch meant for developing local talents and should not be compared to national facilities such as the Accra Sports Stadium and the Baba Yara Stadium.

Facilities at the Madina pitch which is expected to be completed in October include; a multi-purpose outdoor court, a children's playground, a five-a-side artificial pitch and changing rooms.