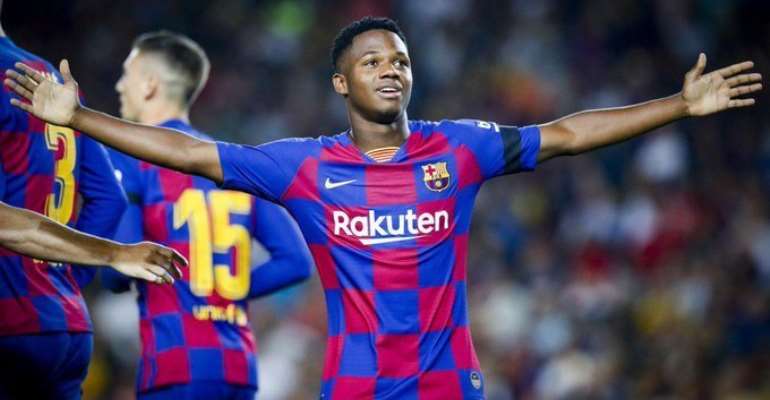 Spain manager Roberto Moreno wants the national team’s governing body to do all they can to convince Barcelona wonderkid Ansu Fati to pledge his allegiance to them.

The Spanish Football Federation (RFEF) will no doubt have been stunned by the rapid rise of the 16-year-old after he netted his second goal in two games for Barcelona at the weekend.

He is eligible to play for Guinea-Bissau, the country of his birth, but moved to Spain in 2012 as a nine-year-old and so would be available to commit to his adopted homeland if he desired. Spain boss Roberto Moreno has made getting Fati to pledge his allegiance as a priority move ‘It’s not an issue which I am in control of,’ Moreno said, as reported by SPORT.

Spain want Fati to pledge his international allegiance to them with a view of making him the star of their Under-17 side at the World Cup in October. Fati is firmly part of the first-team set-up at the Nou Camp this season and marked his first senior start with a goal in the 5-2 win over Valencia.

The 16-year-old became Barcelona’s youngest-ever scorer when he netted against Osasuna prior to the international break and, pushed into the starting line-up, he needed less than two minutes to find the net again.

Fati, who was a major threat throughout, then set up Frenkie de Jong for the second only four minutes later with Spanish media asking ‘what planet had he come from?’ following another impressive display.