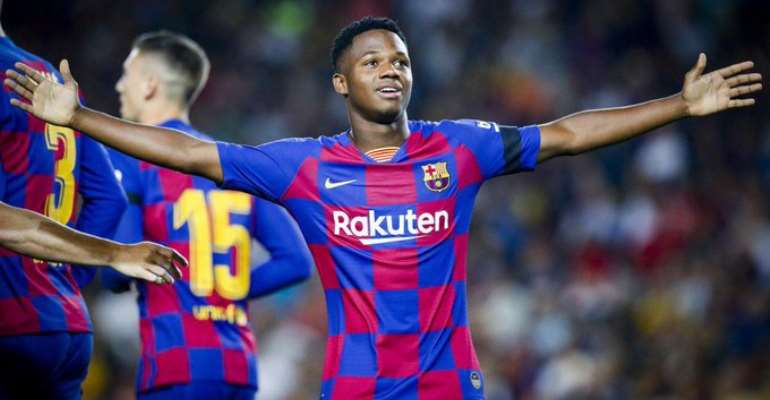 Barcelona youngster Anssumane ‘Ansu’ Fati appears to be the favorite to break the youngest scorer of the Uefa Champions League record after being included in the final squad of the La Liga giants traveling to Germany for the clash against Dortmund.

For the past 22 years, the enviable record has been held by Ghanaian striker Peter Ofori-Quaye who set the record at age 17 years and 195 days for Olympiacos against Rosenborg in October 1997.

After over 2 decades, pundits are tipping sensational Ansu Fati to score against Dortmund on Tuesday to break that record.

The left-footed attacker built in the frame of Lionel Messi has been in banging form since the start of the Spanish La Liga, scoring two goals in the process.

His impressive outing has convinced Barcelona head coach Ernesto Valverde to include him in his squad for their Champions League opening match against BVB in Group F.

A goal for Ansu on the match day will mean that he becomes the youngest scorer in the competition at the age of 16 years and 322 days.

Meanwhile, if he fails to score, he will have until the semi-finals of this year’s edition of the competition to break Peter Ofori-Quaye’s record.