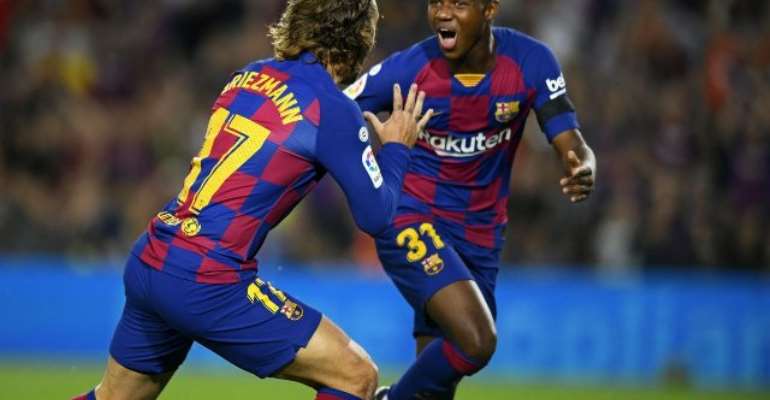 Spanish champions Barcelona thrashed Valencia 5-2 on Saturday while Real Madrid scraped past Levante 3-2. Here are the five talking points from the action in La Liga this weekend.

AWESOME ANSU
While Lionel Messi watches on from the sidelines, a new star is being born at the Camp Nou.

Ansu Fati, 16, scored on his first start for Barcelona as they thrashed Valencia, setting up the second goal for Frenkie de Jong.

The Bissau-Guinean forward has two goals and an assist in three appearances this season and Argentine talisman Messi, still recovering from a calf injury, grinned in the stands as the youngster ran amok.

"There will be a lot of hype around Ansu and we must deflate it, our job is to protect the player," said Barcelona coach Ernesto Valverde.

Neither of the two major newspapers in the region took notice of the coach, splashing the youngster across their front covers.

A REAL ROLLERCOASTER
For sheer entertainment value, Real Madrid will be hard to beat this season.

Adding Eden Hazard to their array of attacking options means Los Blancos have plenty of firepowers, but their defence looks to be struggling.

Real proved that on Saturday by racking up a three-goal lead at halftime but nearly collapsing against Levante, who pulled two back but could not find the equaliser.

Zinedine Zidane has not managed to install any defensive discipline in the side and it shows, with Real conceding six goals in their first four league games.

RED SUNDAY
Over Friday and Saturday, no red cards were shown in La Liga, but on Sunday there were five in five games.

Naldo got the ball rolling with his dismissal in Espanyol's 2-1 win at Eibar.

Celta Vigo had Jorge Saenz and Fran Beltran sent off in the first 29 minutes as they unsurprisingly lost 2-0 at home to Granada, while Betis duo William Carvalho and Loren Moron were dismissed in the 1-1 draw with Getafe.

There has been a lot said about Atletico Madrid's start to the season, with Diego Simeone's side building momentum and winning the first three matches.

Their run ended at Real Sociedad's shiny new-look stadium, where they tasted defeat for the first time thanks to a Real Madrid loanee.

Martin Odegaard continued his fine form for the hosts by breaking the deadlock and Atletico's defeat allowed unbeaten Sevilla to move top of the standings with a 1-0 win at Alaves on Sunday.

DEJA VU FOR CELADES
New Valencia coach Albert Celades won't want to come back to the Camp Nou in a hurry.

Hired to replace Marcelino, whose sacking left Valencia in crisis in midweek, the coach faced a baptism of fire.

Barcelona ran riot, putting five past Valencia, just as they did to Real Madrid last season at home - when Celades was working as then coach Julen Lopetegui's assistant.

In over 100 games with Marcelino at the helm Valencia did not let in five goals and this was their heaviest defeat since the 7-0 thrashing they suffered under coach Gary Neville at the hands of Barcelona in the Copa del Rey in February 2016.