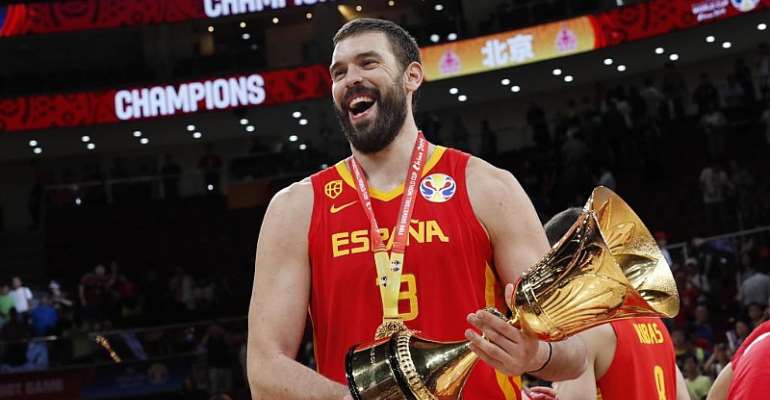 Spain lifted the basketball world cup for the second time on Sunday with a 95-75 victory over Argentina. The result at the Wukesong Arena in Beijing allowed Marc Gasol to become only the second man to win an NBA crown and the world cup in the same year.

Three months ago, the 34-year-old was a key part of the Toronto Raptors' run to the NBA title.

On Sunday he scored 14 points in the triumph over Argentina. "What can I say? I feel very fortunate to be in this position, to play this game. All of the things you sacrifice, it's worth it ... what a year, what an amazing year."

Nine years ago, Lamar Odom hoisted the NBA title with the LA Lakers before going on to clinch the world cup with the United States.

Ricky Rubio, who notched up 20 points during Sunday's final, was declared the most valuable player of the competition. He hailed the teammates who had emulated the cup-winning 2006 side.

Feat
"We made history and we are really proud of that," said Rubio. "We had a great tournament."

"It's just amazing how the tournament has been for us as a team," he added. "You can tell we were the team with the biggest heart and we showed it in the final and during the tournament."

Argentina had not won the trophy since they hosted the inaugural world cup in 1950. They outmuscled France in the semi-final on Friday but against Spain they were outwitted from the outset.

Grip
The Spaniards surged into a 14-2 lead and never relinquished that stranglehold.

Led by their Italian coach Sergio Scariolo, Spain were up 21-14 going into the second quarter and increased their advantage to 43-31 at half-time. The final quarter was a tension free procession.

"No excuse, we were not tired," said Argentina coach Sergio Hernandez. "For me, we won the silver medal. We didn't lose the gold medal. I feel very proud of my players."

France, who beat the United States in the last eight before going down to Argentina in the semis, defeated Australia 67-59 to claim bronze for a second consecutive world cup.

"For us it's something very, very special and important we did it after a very difficult first half," said France coach Vincent Collet said.

The United States went into the tournament seeking their third trophy on the trot. However they finished seventh, their lowest position in tournament history.