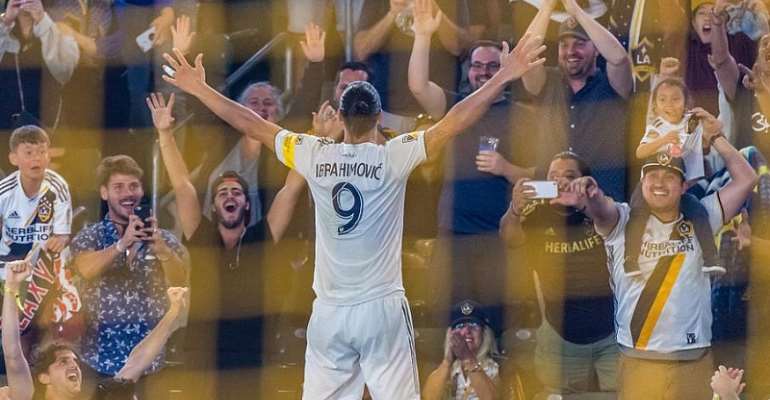 Zlatan Ibrahimovic scored a hat-trick as Los Angeles Galaxy pummelled Sporting Kansas City 7-2 on Sunday to put themselves in the thick of the Major League Soccer playoff race.

After giving up an early goal to Sporting's Felipe Gutierrez, the Galaxy stormed back to climb from eighth place and outside the MLS Cup playoff positions in the Western Conference and into fifth.

Former Sweden and Manchester United striker Ibrahimovic launched the comeback in the 32nd minute after Los Angeles were awarded a penalty because of Matt Besler's handball in the area.

Ibrahimovic's effort from the spot was deflected by Tim Melia, but the Sporting goalkeeper couldn't hang onto the ball and as he slid helplessly to the ground Ibrahimovic stepped forward to slot the ball into the net.

The floodgates opened for the Galaxy in the second half. After Joe Corona's header made it 2-1, Ibrahimovic bagged his second, controlling a cross from Rolf Feltscher and beating Melia with a left-footed blast.

After a goal from Uriel Antuna and a brace from Sebastien Lletget, Ibrahimovic completed his third MLS hat-trick before Gutierrez rounded out the scoring with Sporting's second.

"We said at halftime we need to keep going," said Ibrahimovic, who set a Galaxy club record with 26 goals for the season, surpassing the 24 scored by Carlos Ruiz in 2002.

Ibrahimovic is now within two goals of Los Angeles FC's Carlos Vela in pursuit of the MLS Golden Boot award.

The goal-fest – it was the most goals scored in a match by the Galaxy since 1998 – came after an eight-match stretch in which they had only earned five points.

"The result says it was easy but it was not easy," Ibrahimovic said. "The second half we were much stronger. When we had the opportunities we scored, that was the key thing.

"Like I said before the game we need to get a good result to win and get the confidence," he added. "So we bring confidence to the next game. Today was a good game but it's not over yet.

"Four games left and hopefully we can do the same job like we did today."

We’re Investing Massively In Infrastructure; Not Rearing Fly...
25 minutes ago

Mahama Shakes Tarkwa As Menzgold Customers Give Him Rousing ...
25 minutes ago