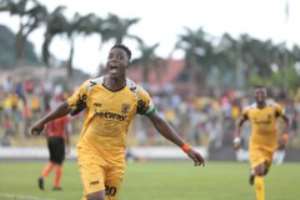 Captain for Obuasi Ashanti Gold, Shafiu Mumuni has expressed optimism in his side’s ability to eliminate RS Bekane from the CAF Confederations Cup following a 3-2 win against the side at the end of the first leg.

The Ghana Premier League side hosted their Moroccan counterpart at the Len Clay Sports Stadium in hopes of recording the needed victory to ensure their trip to Bekane will be easier.

Following a pulsating encounter, the Miners emerged as 3-2 winners in a five-goal thriller. Though they finished the match with the win, several concerns have been raised with regards to how they gave away two goals to their opponent in a competition where the away goal rule is key.

Sharing his thoughts ahead of the second leg, Shafiu Mumuni believes Ashgold can go through this stage of the competition despite making some mistakes in the first leg.

“I am confident we can qualify, we will go back to training and rectify our mistakes", the attacker said in an interview with Oyerepa FM.

He further shared, “One thing that caused us is when we lost concentration. That is the reason we conceded the 2 goals.

“Let’s not lose hope, we can qualify”.

Shafiu who now has four goals in the competition will be key for the Yellow and Blacks if they are to make it to the group stage of this year’s CAF Confederations Cup.

The return fixture comes off on September 26, 2019, at the Stade Municipal de Berkane.