Eddie Nketia On Target As Leeds United See Off Barnsley 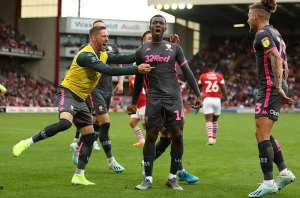 English-born Ghanaian attacker Eddie Nketia was on target on Sunday to help Leeds United record a 2-0 win over Barnsley at the Oakwell Stadium on match week 7 of the English Championship.

The striker is currently on a season-long loan from English Premier League side Arsenal and has been in fine form since joining the Whites.

In a match that Leeds United faced difficulties as far as scoring is concerned, Eddie Nketia had to climb off the bench to open the scoring for the side. He replaced Patrick Bamford in the 70th minute and managed to find the back of the net on the 84th minute.

The Peacocks built on that lead and got a second courtesy a strike from Mateusz Klich in the dying minutes of the match. The player stepped up to convert a penalty kick won by Eddie Nketia.

Leeds United has returned to Elland Road with all three points and now top of the Championship standings on 16 points.

We’re Investing Massively In Infrastructure; Not Rearing Fly...
21 minutes ago

Mahama Shakes Tarkwa As Menzgold Customers Give Him Rousing ...
21 minutes ago