Fury Shows Off bloodied Wounds From Fight With Wallin 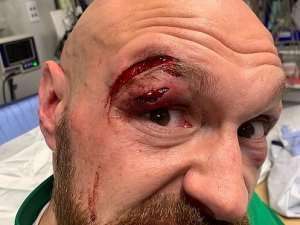 Tyson Fury has shown off his nasty battle wounds suffered during his win over Otto Wallin as the Brit had to overcome the bloody injury to grind out a points victory over the Swede.

The Gypsy King was unable to fulfill media duties following the fight as he was admitted to hospital so that medical experts could attend to the gash.

In a picture posted to Instagram, Fury is photographed bearing his teeth in a close-up image of his battle wound. There is dried blood on his right cheek from the contest.

It is not yet known what lasting damage the injury could have on the 31-year-old heavyweight.

Due to the severity of the cut, Fury's future opponents may see that area of his head as a perfect target to aim for in upcoming bouts.

Fury's performance was slammed by his own father, John, who said it was the worst performance of the 31-year-old's career and that he was too light for the fight after weighing in at 254.4 lbs (18 stone 1 pound).

Fury Sr also said he'd sack Fury's backroom team for their failure to get him into sufficient shape after an eight-week camp, but those harsh words failed to dampen the mood in his camp.

He told BT Sport Box Office: 'It's the worst I've seen from Tyson.

'I'm proud of how he has mauled his way through but he has to be honest and say things are not right. For a man to be in that condition after eight weeks (in) camp - it looked like he had nothing after round two.

'His strength and power went tonight, he was as weak as a kitten from the first round. At 18 stone one, I've warned him and warned him. He is a 19-stone fighter.'

Fury's trainer Ben Davison, 25, responded on Twitter saying: 'he's had a tough fight which [he] clearly won, after being cut terribly not only 1 but 2 cuts. Sometimes you can't win.'