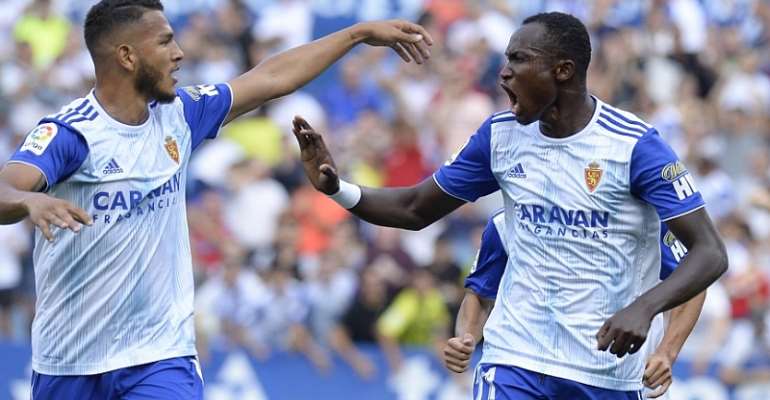 Ghanaian striker Raphael Dwamena found the back of the net for the second match running earlier today to help his Real Zaragoza side beat Extremadura 3-1 at the La Romareda Stadium in the Spanish Segunda Division.

The attacker has been leading the lines for the lower division side since the start of the ongoing 2019/2020 Spanish La Liga 2 season and was handed a start when his side welcomed their match week 5 opponents.

Following a good start to the match, the Blue and Whites took a deserved lead on the 12th minute courtesy a strike from Raphael Dwamena.

The hosts held on to the lead for a while but conceded on the brink of halftime when Diego Caballo scored for Extremadura.

Zaragoza returned from the break and pushed for the equalizer that would give them all three points at the end of the 90 minutes.

A goal from former Manchester United midfielder Shinji Kagawa, as well as a strike from Luis Suarez meant that Raphael Dwamena’s side finished the match as 3-1 winners.

The Ghanaian forward was replaced by Jorge Pombo later in the game after he had been yellow carded.

Dwamena who is on loan from La Liga side UD Levante now has 2 goals and will be hoping for more as the season takes shape.