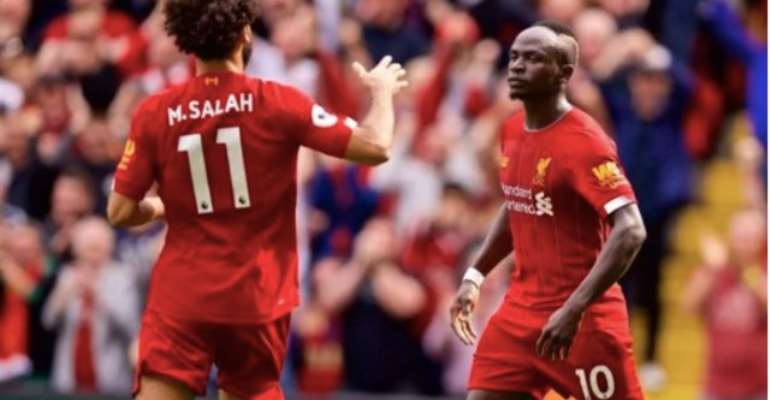 Premier League leaders Liverpool shrugged off an early scare to sweep past Newcastle and maintain their 100% start to the season with another dominant attacking display.

Sadio Mane was again their go-to man, scoring twice in the first half after Jetro Willems' fine first goal for Newcastle had given Steve Bruce's side a shock early lead.

Mohamed Salah added a third after the break, with the third member of Liverpool's attacking trinity Roberto Firmino providing two brilliant assists and stealing the show with a superb performance from the bench.

The Reds have now won 14 league games in a row in a run that stretches back to a draw at Everton in March - the joint third-best winning run in English top-flight history - and go five points clear at the top, with second-placed Manchester City playing in the evening game. Newcastle never threatened to build on their surprise lead - which came via their only shot on target all day - and could not get near the European champions for large periods of a one-sided game.

They remain in 16th place, a point above the bottom three.

Three-part harmony
The spotlight was on Salah and Mane after their apparent disagreement last time out at Burnley, when the Senegal forward was seemingly annoyed at a lack of service from his Egyptian team-mate.

But back on home ground Liverpool's front three were once again all on the same page and yet again proved the difference.

Firmino played an hour for Brazil in Los Angeles in midweek in a game that finished at 06:00 BST on Wednesday morning and the plan was to give him some rest as Divock Origi started on the left of the front three.

But an injury for the Belgium striker meant the Brazil forward was introduced earlier than anticipated.

Mane had already equalised by that point, collecting a pass from Andrew Robertson and curling superbly into the top corner.

For those paying attention, Salah celebrated with a punch of the air.

Firmino then robbed Christian Atsu and slid in Mane with a beautiful pass. Newcastle goalkeeper Martin Dubravka should have gathered it but instead pushed it back towards Mane to allow the Liverpool forward to tap-in for his 19th goal in his last 21 Premier League appearances at Anfield.

After the break Firmino was even more impressive, laying on chances for both his full-backs before setting up the previously quiet Salah with a wonderful assist.

Receiving the ball with his back to goal, the Brazilian dragged the ball back then backheeled it into the path of Salah, who did the rest.

Manchester City's record of 18 top-flight wins in a row remains on the agenda for Liverpool - as does Chelsea's record of nine victories in a row at the start of a Premier League season.