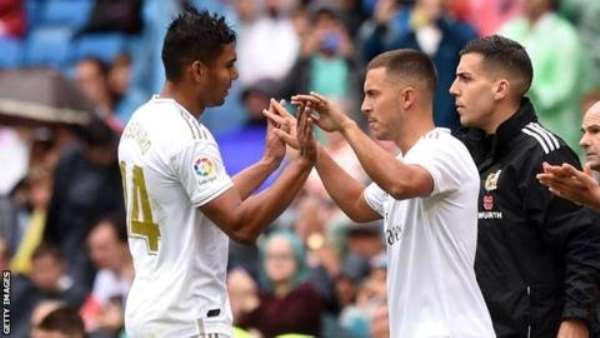 Eden Hazard made his Real Madrid debut as Karim Benzema scored twice in a nervy La Liga win over Levante.

Hazard, a summer signing from Chelsea, has recovered from a muscle injury and came on after 60 minutes at 3-1.

Real had led 3-0, with Benzema scoring a header and slotting home a James Rodriguez pass, before Casemiro netted.

But Borja Mayoral scored against his parent club and then Gonzalo Melero set up a tense ending with a header that beat Thibaut Courtois at his near post.

Real almost blew a three-goal lead in La Liga for the first time since 1946, but Ruben Vezo's header in injury time was turned away by an instinctive Courtois save, the Belgian's only stop of the game.

Hazard finally makes his bow
Belgium forward Hazard waited years to get his dream move to Real Madrid - in a deal which could end up costing £150m - and he had to wait a few weeks more for his debut after suffering an injury in pre-season.

He replaced goalscorer Casemiro after an hour, and was immediately in the action - setting up a chance for Vinicius Jr, which was blocked, and then having a shot saved by Aitor Fernandez.

However, short of fitness, the 27-year-old became a peripheral figure as Levante started to grow into the game - though he did manage 29 touches of the ball, a 100% passing rate and two shots on target, as well as winning three free-kicks.

Whether he has done enough - or is fit enough - to start at Paris St-Germain in Wednesday's Champions League opener remains to be seen.