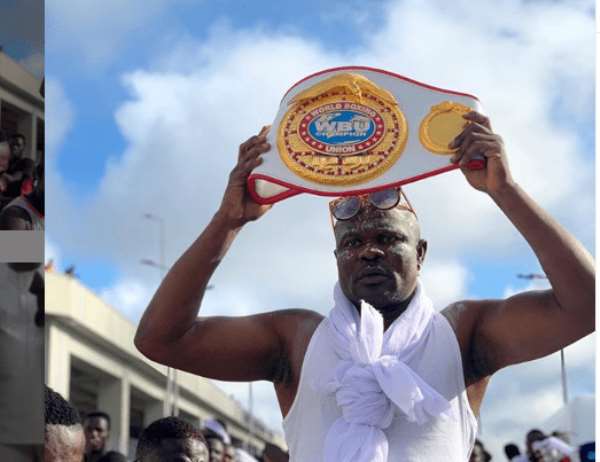 Ghanaian boxer, Braimah Kamoko, popularly known as Bukom Banku, has has been given a rapturous welcome after defeating Hungarian opponent, Ferenc Albert, in his first international fight outside Ghana.

The tough-talking boxer earned the victory after dropping the Hungarian in round three at St George Hall in Bradford, the UK on Saturday, September 7, 2019.

Prior to the fight, Ferenc had promised to knock out Banku in round three but he turned out to be a no match for Banku as the Hungarian got knocked out rather.

Arriving at the Kotoka International Airport on Friday, September 13, 2019, Banku received a hero's welcome with hundreds of supporters.

The crowd mobbed him and carried him shoulder high with chants.

Later, Banku was spotted in convoy of vehicles showing off the title he won while acknowledging cheers from fans.

Video and Photos below...