The Story Of Adebayor’s Famous Goal Celebration Against Arsenal 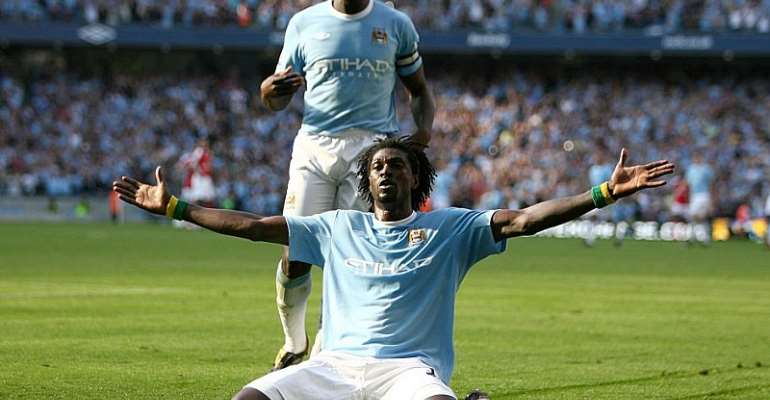 A decade ago this month Emmanuel Adebayor produced one of the most infamous goal celebrations in Premier League history.

In a match between Arsenal and Manchester City at the Etihad, the Togo international netted against his former side with 10 minutes to go, before sprinting from one end of the pitch to the other, toward the travelling support in one of the most memorable celebrations in the competition’s history.

The move culminated with Adebayor, who would later detail the racially abusive chants aimed at him throughout the game, knelt before the Arsenal crowd, motionless amid a wave of projectiles in what he has since referred to as his “spiritual zone.” Teammate Kolo Toure is said to have remarked to Adebayor, “I was looking at the pictures and you did not flinch once.”

Five things to know about Adebayor’s celebration vs Arsenal…

Two months prior to the extraordinary moment in September 2009, the one-time African Player of the Year had just sealed a £25m switch from the Gunners to Man City during one of the most significant windows in the early Sheikh Mansour era.

In only the fourth match of the 2009/10 Premier League season, Adebayor was given an immediate chance to show Arsenal fans exactly what they would be missing, as Mark Hughes’ side hosted the north London outfit.

What unravelled was a highly-intensified battle in the North West, in which a number of fiery challenges blotted what proved to be an epic match, most notably the moment Adebayor appeared to stamp on the side of Robin van Persie’s head.

Goals from Micah Richards and Craig Bellamy had given City a 2-1 advantage before Adebayor converted a bullet header from Shaun Wright-Phillips’ cross in the 80th minute.

And then, well, he sprinted the length of the pitch to celebrate in front of the Arsenal fans.

The Citizens ultimately won 4-2 and Adebayor received a suspended two-match ban and a £25,000 fine – which he later called “excessive” – after being found guilty of improper conduct.

Explaining why he celebrated in front of the Arsenal fans – as well as the fact it was not his decision to leave – Adebayor said at the time: “There is only so much abuse a man can take until he reaches breaking point. I could not understand some of the Arsenal players being disrespectful towards me.

“I was being abused by people who six months ago were singing my name. The abuse was for no reason. It wasn’t my fault I left, it was Arsene [Wenger] who wanted to accept the offer for me.

“If you were to abuse a man in the street for over an hour he would react and it would be a worse reaction than a goal celebration.”

In the immediate aftermath, the FA accepted that the abuse directed towards Adebayor had been of “an extremely provocative nature”.

Adebayor has since spoken out about the incident, explaining in greater detail how the abuse he suffered went beyond tribalistic flak; rather, that he was subjected to racist taunts.

In April this year, he told the Daily Mail: “When I celebrated, the FA fined me, they punished me. Nothing happened to the Arsenal fans. So it [racism] started with me and long before me.

“I remember getting to the stadium and Arsenal fans were there. All I heard was the chant, ‘Your mother is a whore and your father washes elephants.’

“And now the same FA are trying to stop racism? I’m sorry. It doesn’t work that way. Today is too late. We’re tired. Enough is enough.”