Asantehene And Okyenhene To Play Golf On Oct 9 At Tafo 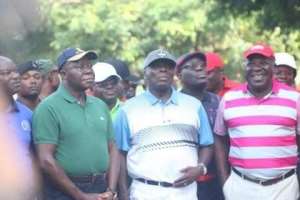 The Tafo Golf Course / Club at the Cocoa Research Institute of Ghana in the Eastern Region will be the venue for the 2019 edition of the Royal Golf Challenge as two most highly respected kings in Ghana come up to play golf.

Nana Otumfuo Osei Tutu II, the Asantehene, who has been in power since 26 April 1999 and Osagyefuo Amoatia Ofori Panin, the reigning king of Akyem Abuakwa Okyenhene, with the title of the king of Akyem Abuakwa, (also styled Okyeman), an ancient kingdom in the Eastern Region of Ghana, also referred to as the Kwaebibiremhene as his traditional territory is an area of a dense forest will come on the greens to exhibit their golf skills on October 9, and it is going to be a thriller.

Other top golfers in Ghana will take part in the tournament which has attractive prizes at stake.

The two revered personalities have played golf before and it was a memorable occasion, as their performance also unites the people and make them work harder.

The royals playing golf has been hailed by many sports enthusiasts as it also encourages them to be fit.