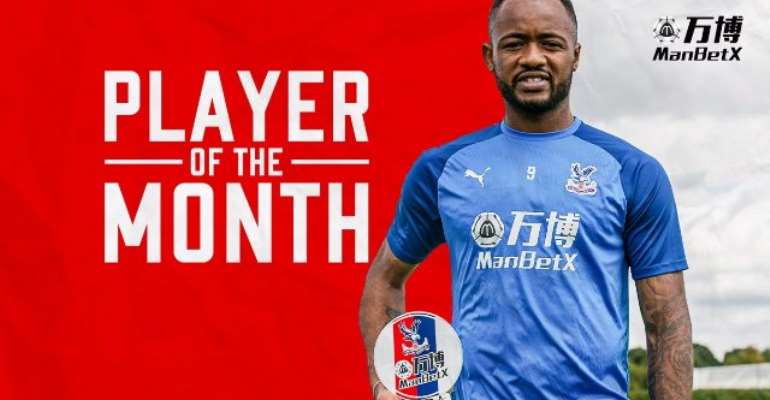 Ghana striker, Jordan Ayew has been named Crystal Palace player of the month for August.

The 28-year-old has two goals from his three appearances in the league so far, scoring the winner in the Eagles' last league outing against Aston Villa, as well as bagging the crucial opener for the club's historic victory against Manchester United at Old Trafford.

Winning the award with an 84% majority from more than 1,000 fans who voted on the club's official app, the Ghanaian forward was a hugely important figure in helping push Palace into 4th in the Premier League table after four games in August.

Upon receiving the award, Ayew was quick to share his appreciation towards the fans for their support: "I want to thank them, and everyone at the football club.

"I am grateful and this is a good thing, but it is just the beginning. It gives me more energy and desire to work harder for this football club."

Ayew is cutting a popular figure at Selhurst Park since he made the permanent switch this summer, even winning the eToro Man of the Match awards for his efforts against Everton, United and Villa.

He said: "My target was to start well. Thank god everything went well. I need to continue, do better and work harder. We are happy [as a squad], but we all know that it's still the beginning and we have a lot of games to go, so we know that there are important games coming up, and we need to keep our focus and keep working hard."

Speaking after victory over Villa, Palace manager Roy Hodgson recognised Ayew's efforts, saying: "Had he not scored the goal today, I would still be heaping praise on him because of the work he does for us, his tactical understanding, the number of times he does the job we want tactically to help other players take up the positions they need to take up. I’m not just talking attacking-wise, I’m talking defending too.

"When he puts icing on that cake by scoring a goal last week and a goal this week, then it’s happy days - there’s no doubt about that. It’s in particular happy days for him and it’s happy days he deserves. Last season, he didn’t get as many opportunities as he would like to have had.