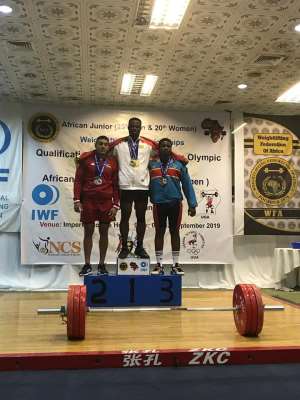 Christian Amoah, the triple bronze medallist in the just ended African Games and one of Ghana's Olympians arrived in the Ugandan capital of Kampala to compete in the Olympic qualifier, African Junior Weightlifting Championship.

Christian who travelled without a coach due to financial constraints, was handled by the coach of the Ugandan senior weightlifting team, as per an arrangement by the Technical Director of the Ghana Weightlifting Federation (GWF), and he was the sole lifter from Ghana competing in the 89kg category.

In a chat with the media at the airport just before his departure, he promised that he is going to come back home with at least 3 gold medals, he had also hope that there was enough funds to have made it possible for the rest of the Junior team, Winnifred Ntumi, David Akwei, Jerry Benye, Sandra and Gabriel Owusu to have all travelled with him, since all of them have the potential of winning medals at the championship.

He thanked the Federation President, Ben Nunoo Mensah for making it possible for him to travel.

He is due back home on the 13th of September.