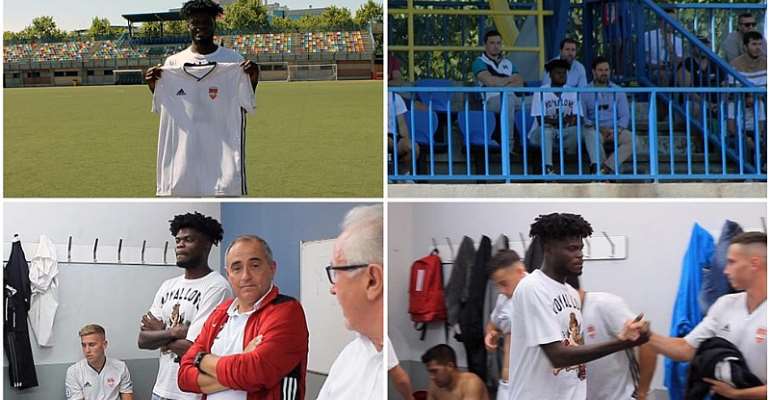 Ghana superstar Thomas Partey has proven to be an astute football businessman as he has splashed out to buy Spanish third division club Alcobendas Sport, Ghanasoccernet.com can exclusively reveal.

The midfielder, who plays for Spanish top-flight club Atletico Madrid, silently acquired a stake in the club with the mission of getting them promoted to the top leagues of the fiercely competitive league systems in the world.

The 26-year-old, who is regarded as one of the finest footballers in the world, joined three of his Spanish advisers to seal the complete takeover of the club based in the capital Madrid.

The four partners bought the club in July and they all have equal share in the club playing in the third division of the Spanish football system with the mission of gaining promotion by scouting some of the best young players in Spain.

"I have joined three of my advisers who are also my good friends for us to takeover Alcobendas Sport to make it one of the great clubs in Spain," Partey exclusively told Ghana's leading football news outfit Ghanasoccernet.com on Tuesday.

"It is an ambitious project but we have put together our plans of making it a success through a gradual process of growing Alcobendas Sport from the ground - up."

Ta carry out the ambitious mission, Partey and his colleagues have recruited the highly experienced and respected coach Javi Banos, the midfielder's first coach at Atletico, who convinced the Spanish La Liga side to sign the Ghanaian as a youngster.

By this move Partey, an unassuming but hugely talented player, looks to have already started planning for his post-playing career as he has observed several African footballers in Europe struggling because of their inability to plan when they retire from playing.

Alcobendas Sport is a Spanish football club based in Alcobendas, in the autonomous community of Madrid.

Founded in 1995 it plays in Tercera División – Group 7, holding home games at Polideportivo Luis Aragonés, which has a capacity of 3,000 spectators.

The club was founded as Soto de la Moraleja, Alcobendas first reached the fourth division in 2006–07, finishing in the fourteenth position.

Changing its name to Soto Alcobendas Club de Fútbol in 2006, the team was again renamed the following year, to Alcobendas Sport, with the intention to cover the entire city.

In 1970, another club in the city was founded, Alcobendas CF. It also competed in the same divisions.