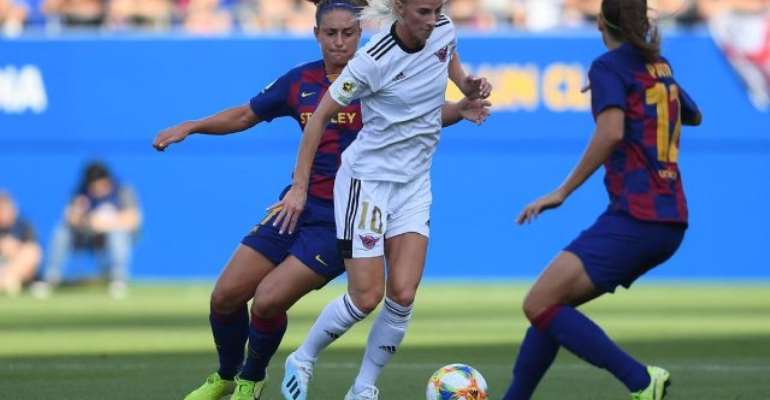 Spain international Jenni Hermoso scored a late hat-trick as Barcelona hammered CD Tacon 9-1 on the opening day of Spain's Women's Primera Division on Saturday, giving the team absorbed by Real Madrid a rude awakening to life in the top flight.

Real Madrid reached a deal earlier this year to buy capital club Tacon although they will not officially become part of Spanish giants until July 2020, yet the game was still billed by many as the first women's 'Clasico' between Spain's biggest sides.

Barca's shiny new Estadi Johan Cruyff opened its doors to the women's team for the first time and 5,413 people crammed into the 6,000 capacity stadium adjacent to the club's training ground for the occasion.

Spain forward Alexia Putellas opened the scoring in the eighth minute after Tacon gave away possession inside their area before strikes from Aitana Bonmati, Mariona Caldentey and an own goal from Lucia Suarez gave the Catalans a 4-0 lead at halftime.

Jessica Martinez scored Tacon's first goal in the top flight early in the second half but Bonmati soon struck again and Barca were ruthless in the final stages of the game.

Norway international Caroline Graham Hansen scored her first goal for the team later in the second half before Hermoso, who returned to Barca from champions Atletico Madrid this summer, struck three times inside the final 20 minutes.