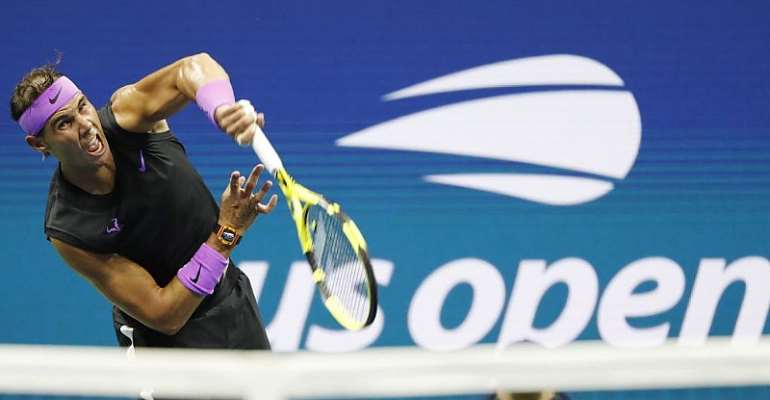 Rafael Nadal will play for his 19th Grand Slam title after beating Italy's Matteo Berrettini on Friday and into his fifth US Open final. If he wins, he is just one victory shy of the all-time record, currently held by Roger Federer.

"Very happy to be back into the final of the US Open," Nadal said. "It means a lot to be back where I am today after some tough moments at the beginning of the season."

Nadal, who shook off an early season right hip injury to win a 12th French Open title, seeks his fourth US Open crown -- one short of the Open-era record of five shared by Federer, Pete Sampras and Jimmy Connors -- to reach the brink of Federer's mark.

"It's just another chance on Sunday," Nadal said. "I want to enjoy a day off, have a good practice and Sunday is the day to play my best."

Nadal, into his 27th Grand Slam final, beat Medvedev in last month's Montreal final in their only prior meeting. But the world number two skipped Cincinnati, where Medvedev was champion the following week.

"He's one of the more solid players on tour," Nadal said of Medvedev. "He's making steps forward every single week.

"I need to be playing at my best."
Medvedev, in his first Grand Slam final at 23, has gone 20-2 in the past six weeks with runner-up efforts in Washington and Canada, a title in Cincinnati and a breakthrough US Open run.

"I'm just happy to be in the final," Medvedev said. "When I was going to USA, I didn't know it was going to be this good. So I have to say I love USA."

“Big Three” era coming to an end
Meanwhile, Nadal warns men's tennis fans that the "Big Three" era is coming to an end very soon, and he's not all that worried about it.

Together with 20-time Grand Slam winner Roger Federer and 16-time Slam champion Novak Djokovic of Serbia, Nadal has been part of a historic trio whose members own 54 of the past 65 Grand Slam men's singles titles -- including the past 11 in a row.

"We don't need to hold this era anymore," Nadal said. "We have been here for 15 years almost. Hopefully, but for my personal interest. At some point, these days, going to happen sooner than later that this era going to end.