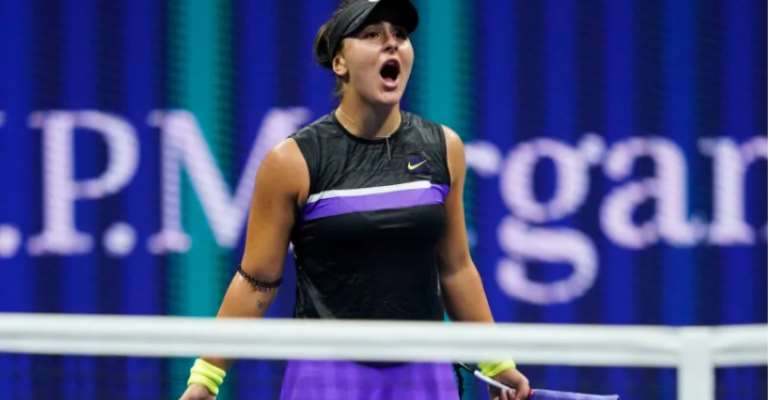 You'll run out of words to describe the never-give-up effort by Canadian Bianca Andreescu on Thursday night in New York.

Down 2-5 in the second set, broken three times, exhausted and against the ropes, Andreescu won five straight games to defeat Switzerland's Belinda Bencic 7-6 (3), 7-5 and punch her ticket to the U.S. Open final on Saturday. It's the first time ever a Canadian singles tennis player will play for a U.S. Open title.

Andreescu, 19, stood near the net inside Arthur Ashe Stadium after the victory, smiling and soaking up the moment as the crowd roared. She was nearly speechless during the post-match interview on the court.

"If someone told me a year ago I'd be in the U.S. Open final, I'd say you're crazy," the Mississauga, Ont., native said. "I think it's just all the hard work."

"It's just crazy what a year can do," she added at a post-match news conference.

Andreescu has spoken a lot about how much emphasis she puts into her mental game — she's made meditation and visualization a part of her daily practice. She believes being able to keep her head in the game is just as important as the physical component.

Maybe that explains why the young Canadian has been able to remain so calm in some of the most intense moments at the U.S. Open.

All she needs in a match is a small flicker of hope — and she found one down 2-5 with Bencic serving for the second set. Bencic coughed up two double-faults and Andreescu pounced.

She was relentless the rest of the way to victory, breaking Bencic four times in the second set. It was a stunning twist.

What's even more impressive about Andreescu's ability to rally when it looked as though the match was headed to a third set is the fact she was playing just 24 hours after Wednesday night's three-set quarter-final win over Elise Mertens. In fact, it marked eight sets played by Andreescu going back to Monday night.

Considering her unshakeable poise on the court, it's hard to fathom that this is Andreescu's first-ever appearance at the U.S. Open.

"I've always dreamed of this moment. I don't think many people would have thought it would become a reality," she said.

The higher the stakes, the more stressful the moment, the better Andreescu plays.

"I don't like to lose," she said. "I just try my best every match. I expect a lot from myself so I think pressure also helps me do my best in matches."

Houdini act in the 1st set
For the second-straight night at the tournament, Andreescu didn't play her best tennis to start the match.

Bencic had break point after break point, but was unable to capitalize on her opportunities throughout much of the first set.

Back and forth the two went, trading games and shots that led to a first-set tiebreak.

That's when Andreescu raised her game and won a 7-3 tiebreak victory.

Again, when she needed her best tennis, Andreescu stepped up. She had 20 unforced errors and five double-faults — and yet, she walked away with the first set.

That was when the two had an on-court exchange that sent Andreescu's star into greater orbit. She rushed over to Williams to ensure she was OK — even dropping a few expletives that made Williams laugh in what was an emotional moment.

In her post-match interview, Williams called Andreescu an "old soul" because of her poise and respect.

And now this.
Twenty years ago, a teenage Williams won her first of six U.S. Open singles titles. Now, she'll take on a Canadian teen — who wasn't even born when that 1999 victory happened — looking to win her first major.

"It's just surreal. I don't know what to say," Andreescu said. "It's just a dream come true."

Andreescu's dream season keeps on rolling. She's now 44-4 on the season, including a Tour-best 30 wins on the hard court.

To be the best, she'll have to beat the best in the stadium Williams has won 101 matches, tied for most-ever at the U.S. Open.

And you get the sense the fearless Andreescu is more than ready for the challenge.

Bawumia calls for greater unity, cooperation between Muslims...
26 minutes ago