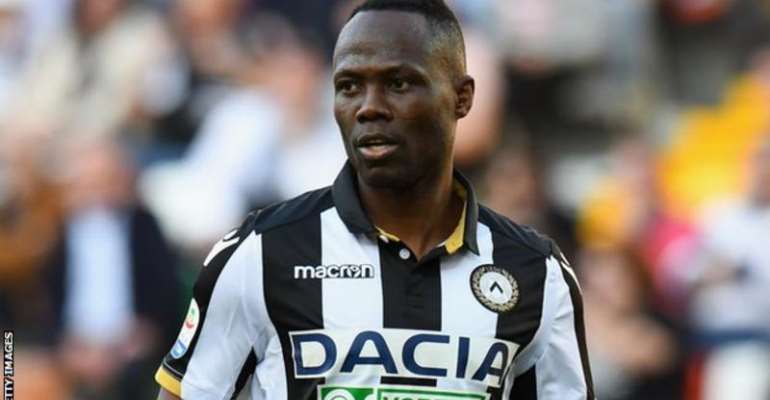 Ghana and Hellas Verona midfielder Emmanuel Agyemang Badu insists that suffering from a blood clot on his lungs will make him 'psychologically stronger.'

The 28-year-old admits that he was left worried after the initial diagnosis of a pulmonary embolism after he was rushed to hospital by his club suffering from a sudden bout of dizziness.

He is yet to return to even light training since being hospitalised on 14 August, he is still undergoing tests and awaits the all-clear to start working in the gym.

"I have never heard of such illness in my life so I was shaking after the explanation from doctors what my situation was," he told BBC Sport.

"It's a bit better now and I am responding to treatment and I'm on the verge of returning to gym work.

"What happened we just have to give thanks to God because it could have been worse."

The setback came as he was trying to relaunch his career with Hellas Verona after a frustrating two years with Italian rivals Udinese.

His last two years at Udinese have seen him loaned out to Turkish club Bursaspor and then return with an injury that kept him out for almost the whole of last season.

"When you go through what I went through last season and return to have a good pre-season and this happens of course you will be disappointed," he explained.

"I am a footballer but first I am a human being so I go through all the emotions too."

Recovering mentally
Understandably his illness also left his family and in particular his mother back in Ghana worrying about him.

Since signing his first professional contract in 2007 with Ghanaian club Berekum Chelsea at the age of 16, Badu has been the bread winner of his extended family.

"My family were sad and panicking once the news started flying in that I had been rushed to the hospital," he said.

"The timing and everything was a bit weird because I had just returned from my summer holidays (in Ghana) and they has seen that I was well.

"I heard they started praying for me and it was not until they heard from me and I explained that I was out of intensive care were they able to relax in a small way."

The mental aspects of footballers recovering from injuries and illness are often overlooked especially when family and friends are not nearby.

Badu found himself alone and surrounded by a team of medics and some club officials, as he underwent hours of tests and quizzes to find out what had happened to him.

He admits he has managed to come out of the experience even more mentally tough than he could have imagined.

"This diagnosis has made me psychologically very strong," he insisted.

"They say you never know how strong you are until you go through something that doesn't kill you. Mentally I have always been strong but this has made me stronger.

"I am just happy it's almost over and I will be able to get back to the gym and hopefully get to join the group in the few weeks-time."

His manager Ivan Juric who was hugely impressed with the midfielder during pre-season expressed hope that it was only a matter of time before he had the Ghanaian as an option for games.

"We all know the quality of the player and the situation was a big surprise to us all," Juric said soon after Badu's illness.

"The report I have from the medical team is that he is in a good place and should be able to come back in after a few more tests."