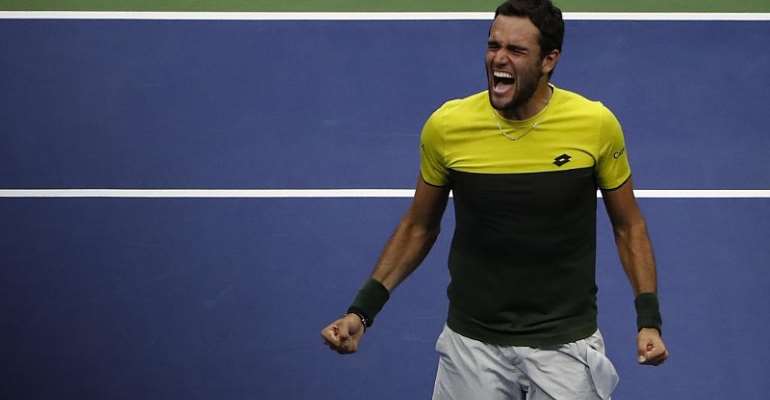 Matteo Berrettini became the first Italian man to reach the US Open semi-finals in 42 years on Wednesday night when he ousted the Frenchman Gael Monfils in five sets. Berrettini, the 24th seed, won 3-6, 6-3, 6-2, 3-6, 7-6 in three hours and 57 minutes.

The victory allowed the 23-year-old to match Corrado Barazzutti's run in New York and he will play the second seed Rafael Nadal on Friday for a place in Sunday's final.

"I'm really happy, " said Berrettini. "What a great fight. I would like to say congrats to Gael. I think when I was playing it was one of the best matches I ever saw. I was playing but I was watching also."

Optimism
Monfils, the 13th seed, said he would not dwell on his loss. "I've got to take the positive of nearly two weeks in New York and keep working hard and get back for the Asia swing."

Monfils was the last of 14 French representatives left in the men's draw at Flushing Meadows but was hindered by serving 17 double faults - two of which came in the fifth set tiebreak.

"My serve was very off," said the 33-year-old. "There were a lot of double faults and not many first serves. That was, I think, a key in the match.

"I was battling with that and with my opponent. So it was tough. I just competed as much I could."

"I'm not a sore loser," he added Monfils. "I give it my all today. The crowd was amazing. They pushed me. They helped me. It was fun. It was exactly what I play for.

"I wish I could have won but I love those matches no matter what and I will be happy to cheer for my girlfriend."

Bawumia calls for greater unity, cooperation between Muslims...
48 minutes ago