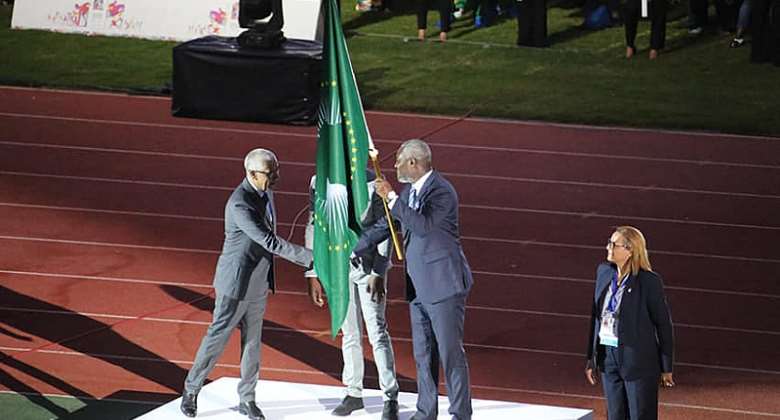 Ghana has officially been handed the African Games flag at the closing ceremony of the 12th African Games on Saturday, 31st August 2019, in Rabat, Morocco.

The handing over of the flag gives Ghana the affirmation to host the 13th edition of the African Games in 2023.

Team Ghana displayed their colourful Kente and Kaba at the opening ceremony of the 12th African Games (AG).

The country clinched her second gold medal at the African Games following the Men’s 4×100 team’s victory in the final.

Team Ghana, with the quartet consisting of Joseph Paul Amoah, Benjamin Azamati, Martin Owusu-Antwi and Sean Safo-Antwi, finished first with a time of 38.30 seconds ahead of Nigeria (38.59) and South Africa (38.80) who finished second and third respectively. In the women’s event, Team Ghana finished in 8th place after they dropped their baton.

Winnifred Ntumy is one record to be the first medal winner (bronze) at the 2019 Games. She got three medals

In total, Ghana won 13 medals to place 15th on the medals table, which had Egypt at the top with 273 medals, Nigeria at second with 127 medals and South Africa in third place with 87 medals. Algeria were fourth with 125 medals and Morocco fifth with 109 medals.