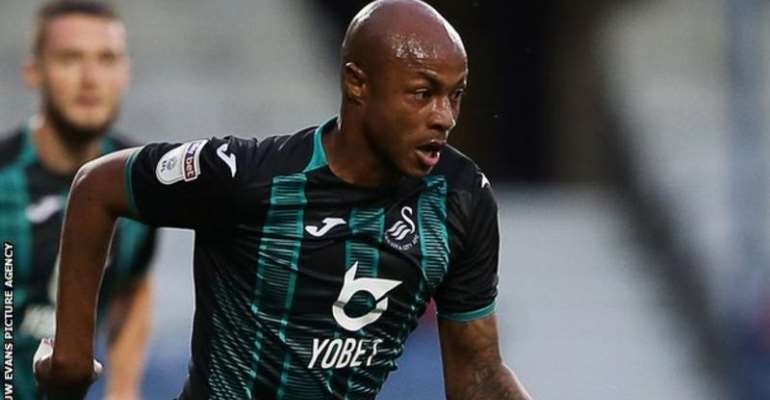 Swansea City chairman Trevor Birch has admitted he is surprised Andre Ayew and Borja remain at the Championship club.

Birch has warned there is still work to be done as Swansea readjust financially following Premier League relegation in 2018.

The Swans are the early Championship leaders having made a fine start to the season under new boss Steve Cooper.

"The two unexpected bonuses have been Borja and Andre Ayew," Birch said on the club's official website.

"To see them still part of our squad when the European transfer window closed last night was great news for everyone associated with the club. That last sentence is not one I thought I would be writing.

"Andre has shown in his first few games back what a quality player he is.

"He has come back to the club with a great attitude and as an experienced member of the squad I think he has a big role to play in helping and supporting some of the younger players as the long season progresses.

"Borja has been like a new signing. He has returned to the club from his loan spells in Spain fully committed and with renewed energy and confidence."

At £18m and £15.5m respectively, Ayew and Borja are the most expensive signings in Swansea's history and are also thought to be the club's top earners.

Both players were out on loan last season and had been expected to leave this summer.

But Dan James' £15m move to Manchester United and the £20m deal which took Oli McBurnie to Sheffield United meant the Swans could keep fellow forwards Ayew and Borja.

Nevertheless, Birch says "restructuring" continues thanks to the cost of dropping out of the top flight.

"It's been no secret that we had and still have some major work to do to get the club back on an even keel and sustainable for its long-term future," he added.

Birch praised the "amazing" job done by Cooper and his players in the first month of 2019-20.

"It's the best start to a league season over the first six games in the club's history - and the best start by any head coach or manager to their tenure with the Swans," he said.

"These are startling facts, but let's not get carried away. We know there are going to be tough times ahead and that's when we all have to stay strong and stick together."

Birch revealed Swansea are close to announcing "another important appointment" in football operations at the Liberty Stadium.