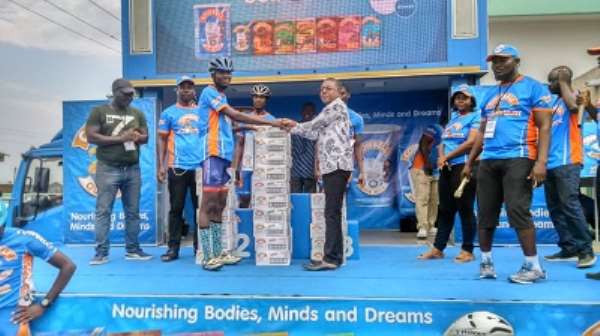 16-year-old cyclist, Allotey Alexander was declared the winner of the 2019 Homowo edition of the Cowbell Cycling competition on Saturday at Prampram after beating over 60 cyclists in a very competitive and exciting race.

In the photo finish time of 2.14:10 seconds, the budding cyclist got his wheels ahead of his close contenders to walk away with the first position.

He dethroned the first stage winner, Frank Akuffo who placed 10th to book a place in the finals.

Allotey took home 10 boxes of Cowbell products and beamed with confidence ahead of the final stage of the competition slated for Teshie on Saturday.

The 81km criteria race of 21 lapses got the Prampram township on cloud nine with top cyclists from the Greater Accra region and beyond in the race.

The first 20 cyclists received products for their efforts while the cash prizes are reserved for the final stage in Teshie.

Allotey said after the race that he was pleased to come ahead of very experienced cyclists who participated in the race.

“I had a wonderful preparation and thankfully I started the race well and kept my composure till the end, “he stated.

He said, just like other cyclists, he was looking forward to a tougher competition at the grand finale but would prepare to make an impact and possibly win the ultimate.

Joseph Ashong, Brands Manager at Cowbell praised the cyclists for their professional display and discipline.

He noted that his outfit would be looking forward for better and professional performance at Teshie for the grand final.

Eugene Tsawe, a representative of the Paramount Chief of Prampram, commended Promasidor, producers of Cowbell for coming on board to support in the celebration of their Homowo festival as more of such competitions will engage the youth in the area to develop interest cycling.