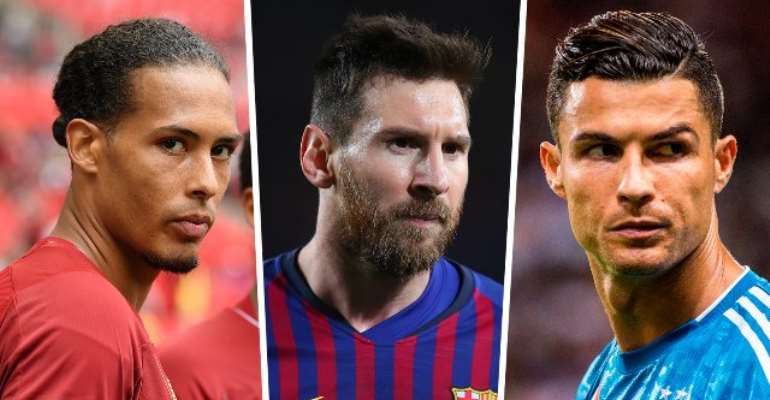 Cristiano Ronaldo, Lionel Messi and Virgil van Dijk have been named as the final three-man shortlist for FIFA's The Best men's award.

The same trio were nominated for UEFA's Player of the Year, with Liverpool's Van Dijk becoming the first defender to win the award at the Champions League draw ceremony last week.

Pep Guardiola is among the contenders for The Best Men’s Coach award after guiding Manchester City to the English domestic treble last season.

Liverpool’s Jurgen Klopp is also nominated after taking the Merseysiders to a sixth Champions League success.

Mauricio Pochettino, whose Tottenham side were beaten by Liverpool in the Champions League final, completes the nominations.

Manchester City and Liverpool were also represented in The Best Goalkeeper category, with Brazilian duo Ederson and Alisson nominated along with Barcelona’s Marc-Andre ter Stegen.

Messi is also in contention for a second award with his chip for Barcelona against Real Betis in March nominated for the Puskas Award for goal of the season.

Juanfer Quintero’s free-kick for River Plate against Racing Club and Daniel Zsori’s strike for Hungarian side Debrecen and Ferencvaros are also nominated.

USA internationals Megan Rapinoe and Alex Morgan are nominated for The Best Women's Player. The duo scored six goals each at the Women’s World Cup in France for a share of the Golden Boot.

Jill Ellis and Phil Neville are in contention for the Women’s Coach of the Year. Ellis guided USA to World Cup success while Neville’s Lionesses reached the semi-finals.

Sarina Wiegman of the Netherlands, whose side finished runners-up, is also nominated.

Silvia Grecco from Brazil, the Netherlands fans at the Women’s World Cup and Justo Sanchez from Uruguay are nominated for the Fan Award.

The nominations were announced at San Siro in Milan with the winners revealed at the Best FIFA Football Awards ceremony, also in Milan, on Monday, September 23.