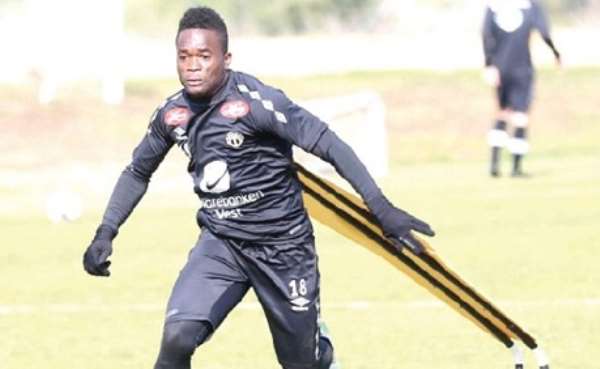 Ghanaian international, Mahatma Otoo says he is ready to help Balikesirspor to gain promotion to the Turkish SuperLig.

The former Hearts of Oak skipper who terminated his contract with the second-tier side following unpaid salaries has rejoined the club earlier this summer.

Speaking to Graphic Sports in an interview, Otoo says he is determined to help his side gain promotion to the top.

“I am happy to join this club again,” the 27-year-old said and added that the problems that forced him to quit the club at the end of last season had been settled.

“My focus now is to score more goals to help the club gain promotion at the end of the season, and I hope I am able to achieve this,” he said.

Last Friday, the player again confirmed through his social media handle a solution to the problem when he stated that, "The meeting with the President was positive. It's still Balikesirspor. Cheers."

Mahatma joined Balikesirspor from rivals Umraniyespor in 2017 and played a crucial role in their setup, but they had to part ways following the disagreement.

However, the player said he and the club had settled their differences now and he was ready to give his best as he did previously.

“My goal is to play well this season and I have trained very hard towards that, and I know my contribution will be felt once I start playing in the matches,” he stated.