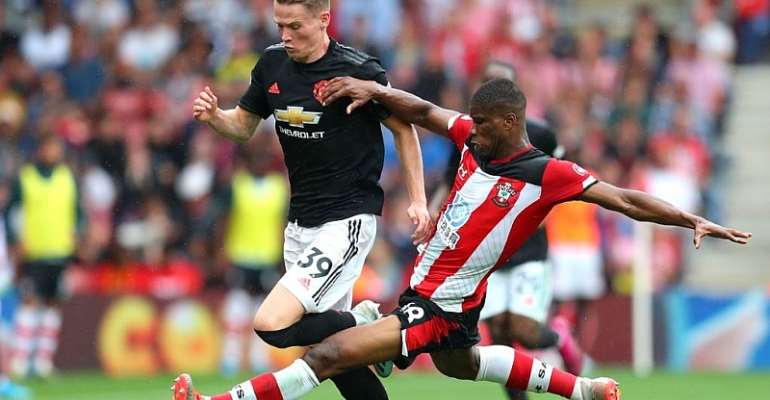 Ghanaian international Kevin Danso was given the marching orders earlier today after receiving a red card during Southampton’s 1-1 draw with Manchester United at the St. Mary’s Stadium.

The two clubs locked horns on matchday four of the ongoing 2019/2020 English Premier League season in a bid to amass 3 points to better their various positions on the standings.

In a match hugely dominated by the Red Devils, the Saints fought back in the second half to ensure they shared the spoils with the visitors at the end of a nervy encounter.

Following several attempts at goal, Wales international Daniel James opened the scoring to give Manchester United a deserved lead after 10 minutes into the first half.

The side went on to be wasteful in front of goal and went into the break with a narrow lead.

Southampton upped their game and restored parity 2 minutes to the hour mark courtesy a powerful header from defender Jannik Vestergaard.

Summer signing Kevin Danso provided the assist for that goal but was later sent off on the 73rd when he mistimed a tackle on English defensive midfielder Scot McTominay.

The highly-rated Ghanaian defender is expected to miss Southampton’s trip to Sheffield United after the international break.