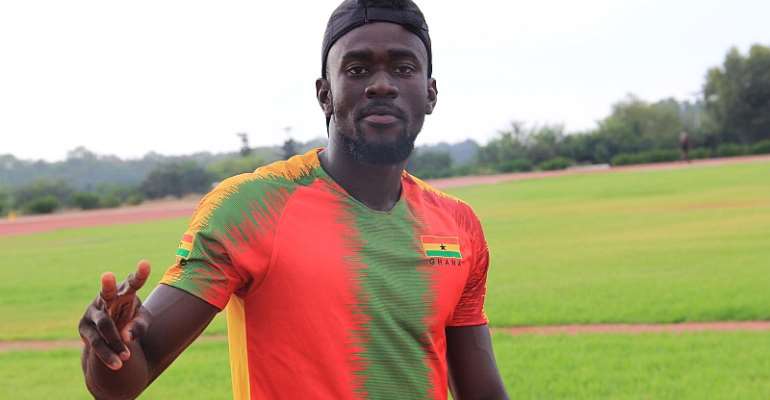 He is the first Ghanaian to qualify to the Tokyo 2020 Olympic Games.

Joseph Amoah placed 4th in the 100m dash race and made amends to finish and win the 4x100m.

He has made an impression and would be respected as one of the guys to watch at the Tokyo 2020 Olympic Games for Ghana.

They will be back in action at the IAAF competition -Doha2019

Joseph Amoah started his track athletics career wondering when it would end.

He was persuaded to carry on, and he’s now the first Ghanaian to qualify for the Tokyo 2020 Olympics.

Amoah had grown up, like many boys in West Africa, playing football in the streets and at school.

Back then, he ran just for fun (“my first sport was football”), and dutifully continued running, carrying on the family tradition.

“When I went to high school, first, I didn’t want to run track, but the teachers spoke to me and told me that I had the potential and everything, so I had to run it,” Amoah told Olympic Channel ahead of winning gold with Ghana's 4x100m relay at the 2019 African Games in Rabat.

“My uncle also went to the same high school, he told me it’s a talent that I have, and I should not throw it away. I should just run towards it, and great things are going to happen.”

But good things come to those who wait.
Ghana's long wait for the next track star could be finally over.

“Every hobby in Ghana is tough. Competing in my country was a good thing, but I wanted to come to the U.S. because I knew they have more facilities and it was going to help me get better in my athletics career.”

. The 22-year-old was named Coppin State Athlete of the Year three years in a row.

His 20.20 seconds run at the conference Mid-Eastern Conference Championships in May, made him the fastest Ghanaian over 200m in 24 years.

It’s a run that Amoah will remember for a long time. It was enough for him to qualify for the Tokyo 2020 Olympic Games - the first Ghanaian to do so.

“Going into the race, I didn’t even know how long it had been for someone to run close to that time. I just wanted to go out there and be aggressive off the blocks, execute the race and get some team points. I saw the time I was impressed it was also a PR,” he recalls.

His 200m PB, and the 10.09 seconds in the 100m dash, also qualified him for the 2019 IAAF World Championships in Doha, the second time he will be running for Ghana at a major international event after his debut at the 2018 Commonwealth Games.

He reached the semi-finals on the Gold Coast, Australia.

Amoah also went to the 2019 African Games in Rabat as one of the favourites for a sprint medal.

His rise to the top is fuelling belief that the golden era for Ghana athletics is on the horizon.

“These generations of sprinters is something special in Ghana,” he reckons.

The hopes are backed by big desires that rest easy on Amoah’s shoulders.

“My dream is to win an Olympic medal and be a World Champion and break some African records and national records too,” he says of his plans to achieve fame and fortune.

The aspiring chartered accountant is confident in his abilities and what he brings to the track.