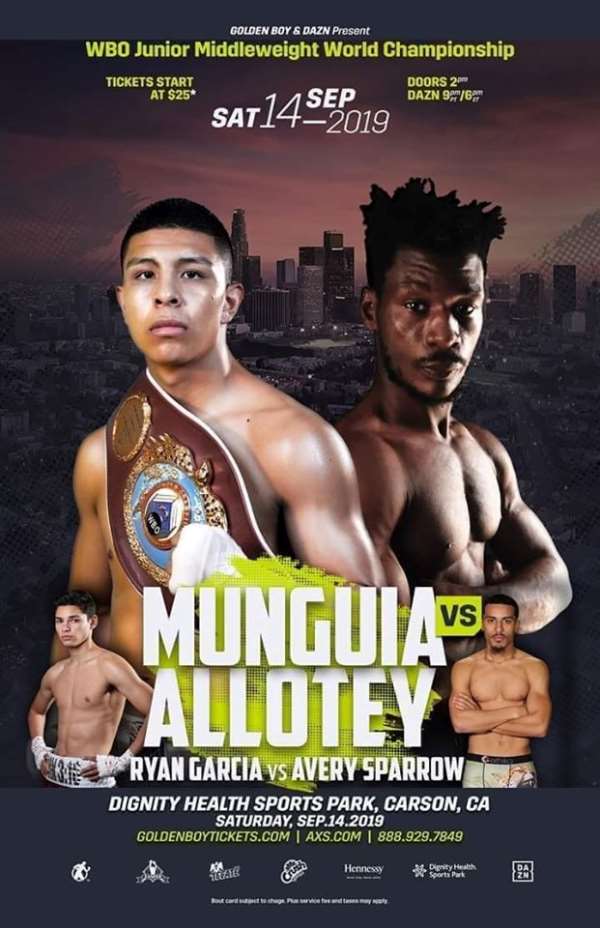 “Ok first of all I will like to thank my management for putting me on the map that I can face the world champion Jamie Munguia because in boxing you need to fight with the best and because I think I am also the best. ” He said

“I also respect to Jamie(Manguia) is a great fighter but I’m also African warrior who is coming to cause surprise on the 14th September, thank you.” Patrick Allotey responded to an earlier message by the defending champion.

“My desire on Sept 14 is to demonstrate everything I’ve been learning with my new trainer Erick Morales. I have a great fighter in front of me (Patrick Allotey) and we are going to show it in the ring.” Munguia expressed earlier.

The Mexican stands three inches taller than the Ghanaian but is also on the decendancy as he struggled to win a controversial twelve round majority decision over Irishman Dennis Hogan in a mandatory fight on April, 13 this year at the Arena Monterrey, Nuevo León, Mexico.

The titanic battle between the duo is set for Saturday, September 14 2019 at the Dignity Health Sports Park , Carson, California, USA to mark the celebration of Mexican Independence Day Weekend.

Patrick Allotey has a lot of experience, confidence and skillset going into this important career fight outside Ghana.

Team Munguia underrates the Jamestown native at their own peril because the exciting ghanaian fighter is determined to write his name in the books of Ghanaian world champions.

Government extends electricity to seven communities in Savan...
19 minutes ago