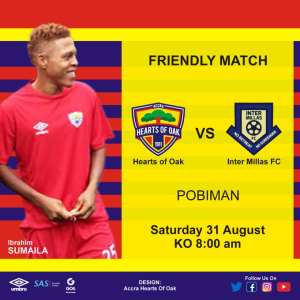 Accra Hearts of Oak has confirmed that they will be hosting lower division side Inter Millas FC in a friendly match on Saturday, September 9, 2019, at the Pobiman Park.

The match is part of measures by head coach Kim Grant and his technical team to assess the progress of the Phobian squad as well as to keep track of the match fitness of players whiles strengthening any weakness in the team.

The encounter against Inter Millas comes on the back of two friendly matches played in the last 5 days against lower division sides Rock Stars FC and Patron SC. The Phobians won both matches with a scoreline of 2-1 and 4-1 respectively.

They are now expected to lock horns with Inter Millas FC tomorrow morning at the Pobiman Park at 08:00GMT.

A week later, Hearts of Oak will play as guests to bitterest rivals Kumasi Asante Kotoko at the Baba Yara Sports Stadium to battle for ultimate glory in this year’s President Cup.