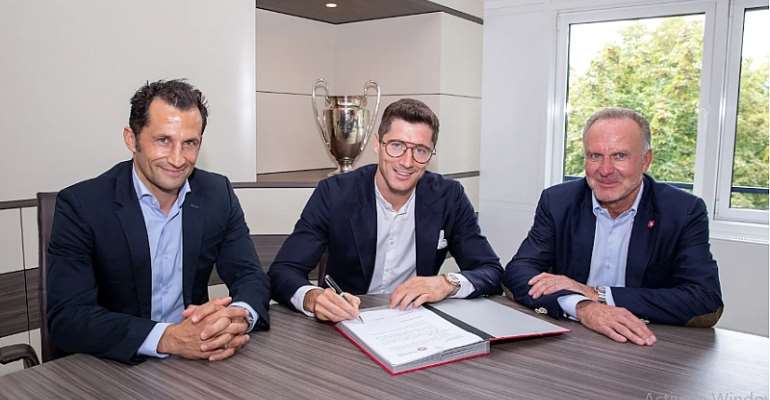 Polish striker Robert Lewandowski, 31, has signed a two-year extension with Bayern Munich, which means he is set to stay with the Bundesliga giants until 2023.

"FC Bayern is one of the three largest clubs in the world and we have an outstanding team. I am proud to be part of this club," said the 31-year-old, who has scored 207 Bundesliga goals in 292 appearances for Bayern and former club Dortmund.

Lewandowski, reportedly one of Bayern's highest-paid stars on 15 million euros ($16.6m) per season, will be approaching his 35th birthday by the time his new contract expires in June 2023.

His pre-season demands that Bayern sign more players to strengthen their star-studded squad seem to have been appeased by the arrival of Brazil midfielder Paulino Coutinho from Barcelona and back-up striker Ivan Perisic from Inter Milan.

"FC Bayern has become my sporting home. We also feel very comfortable as a family in Munich," added Lewandowski, whose wife gave birth to a daughter in 2017.

"I am convinced that we will achieve a lot more in the coming years."

Bayern are delighted to have secured the long-term future of their star striker amid persistent rumours he was being courted by Real Madrid.

"Robert is for me the best centre forwards in the world and for years a supporting pillar of our team," said Bayern chairman Karl-Heinz Rummenigge.

"We are therefore very happy that he will be playing for FC Bayern for a long time to come".

Lewandowski wrote himself into Bayern folklore by scoring five goals in just nine minutes during a Bundesliga match in 2015.

The Polish hot-shot hinted on Saturday that he was "95 percent" likely to sign an extension after scoring a hat-trick in Bayern's 3-0 win at Schalke, leaving him with five goals in the first two league games so far this season.

"He's a legend," newcomer Coutinho said after Lewandowski's hat-trick, but the Brazilian's arrival in Munich is widely believed to be part of the reason why the Polish forward was happy to pen an extension.

Lewandowski has won the Bundesliga title in five consecutive seasons with the Bavarian giants, but the Champions League title, which Bayern won in 2013 with him on the opposite Dortmund team in the final, has so far eluded him.

Bayern head coach Niko Kovac praised the forward.
"He has won the crown of top scorer in the Bundesliga four times. That's great. He's developed really well and is on track this season, we're very happy with that," said Kovac.