It Will Be An Honor To Play For Black Stars, Says Ajax Youngster Brian Brobbey 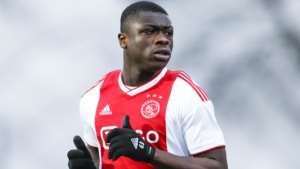 Dutch-born Ghanaian international Brian Brobbey says it will be a nice opportunity to represent Ghana at the senior national team level.

The Ajax forward has represented the Netherlands at the U-17 level.

Speaking to SportsworldGhana.com in an exclusive interview, Brobbey says he would welcome any opportunity handed him to play for the four-time African champions.

”I was born and raised in Holland and I feel Ghanaian is in my blood too so if I get the opportunity to decide in the near future which national team I should play, I will think very good about it before I decide but it will be a nice opportunity to play for the Black Stars."

The 18-year old sensation, the youngest among his brothers namely Kevin Luckassen, Derrick Luckassen of PSV fame and Samuel Brobbey of Jong Almere City FC who are all professional footballers.

Born in Amsterdam to Ghanaian parents, Brian Brobbey has represented the Netherlands at the U-15, U-16 and U-17 levels where he netted 16 goals in 24 games for the U-17 side.