Tottenham To Cause A Stir At The Emirates Stadium – Mybet.africa 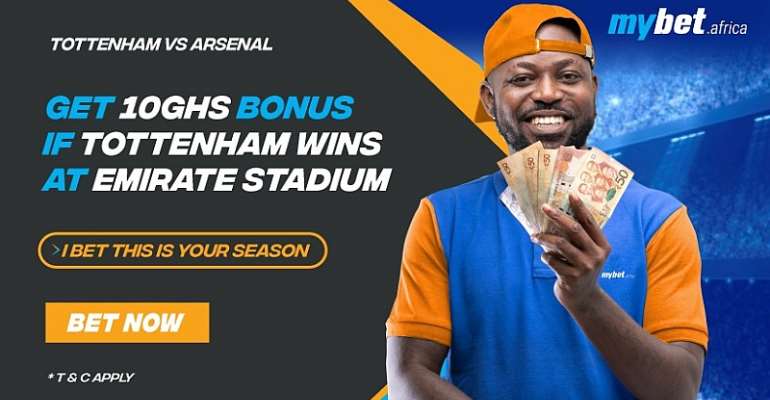 Mybet.africa is offering sports punters a huge 10 GHs bonus on the London derby, should Tottenham win at the Emirates Stadium. To be eligible for this offer, punters will have to place a 20GHs bet to include the Tottenham match.

Arsenal saved some of their best performances last season for their Premier League meetings with Tottenham, beating them 4-2 at the Emirates Stadium in Emery’s first derby and coming within a missed Pierre-Emerick Aubameyang penalty of picking up a deserved win over Spurs at Wembley.

This season, Spurs have proved to be a force to reckon with opening the season with a home win, a good away draw with Man City and a shock defeat at home last weekend. Pochettino will be hoping to make a strong statement as both sides will be going into the game on the back of their respective defeats last weekend. Can the Gunners redeem their image against Hotspurs after losing by 3 – 1to Liverpool last Sunday?

Spurs have the likes of Harry Kane, Lucas Moura, and Tanguy NDombele to cause a stir at the Emirate Stadium as all three strikers have scored this season. Although Arsenal has home advantage, Pochettino and his players are poised to avenge last season defeat at the same stadium and restore hope in their fans. A magnificent away win for Spurs is what Pochettino strongly wants to achieve