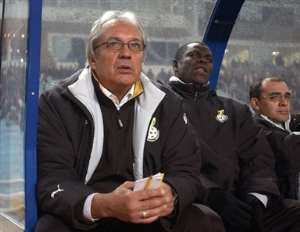 Black Stars Coach Ratomir Dujkovic appears to have been gagged by his employers, the FA, from making any public statement on the Stars until he is further directed.

The beleagured Coach has been under fire since the Stars' dismal performance at the Nations Cup which culminated in a litany of allegations, most of which were highlighted at a post- tournament press conference held a fortnight ago.

Since then Doya, the darling of the media, has withdrawn from the glare of the public as he refuses to grant interviews to the press.

When the Graphic Sports reached him on phone after a frantic search, he refused to talk, with a terse explanation that “I will not talk for this moment”,but when asked to explain this turn of approach, the Serbian simply stated that “I have been told not to talk for the moment”.

The Graphic Sports had gone to the Coach to solicit his views on the directive by FIFA to declare the period between May 14 to the World Cup as rest period, which incidentally may be the time when the Stars preparation will be at its peak.

At the MPlaza Hotel, where he has been putting up since taking up the Ghanaian Coaching job, a front desk official intially confirmed that the Coach was in his room but demanded the details for the visit.

She returned after some minutes to say that the Coach had gone out. At the time, his Honda CRV was parked at the premises of the Hotel and when the lady's attention was drawn to it, she only said wryly that, ”Oh I see, I thought I saw him in the company of some people, may be he left with them”.

However, the Coach was reached on phone a few minutes later and when he was told of the visit he only revealed that the FA had directed him not to talk, and hung up immediately.

The decision to muffle Doya, according to Graphic Sports Sources, followed threats by the Coach to spill the beans after some officials attempted to pass the buck in the wake of the Stars' poor performance at the Nations Cup.

But the FA officials insists that the coach's inabitity to communicate well with his audience was the reason why he has been asked to maintain some silence in order not to complicate matters.

It is recalled that soon after the Nations Cup the Coach granted an interview to the BBC in which he indicated that he was contracted only to qualify Ghana for the World Cup and not to win the Cup of Nations, a statement the FA president desccribed as distasteful and claimed at the press conference that he drew the Serbian's attention to.