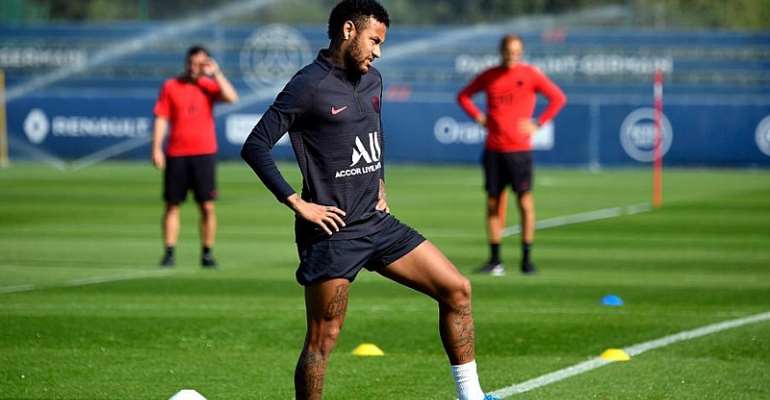 Neymar trained with his Paris Saint-Germain teammates on Wednesday as reports in France and Spain indicated a protracted deal to take him back to his old club Barcelona may still be reached before the transfer deadline.

The transfer window closes on Monday, September 2, leaving Barcelona in a race against time to come to an agreement with PSG that would allow the Brazilian to get his desired transfer back to the Camp Nou.

French sports daily L'Equipe reported that, after previous failed attempts, Barcelona had made a new offer of 160 million euros ($177.3m), paid in two instalments, which could convince PSG to finally sell, provided at least one player is thrown in as a makeweight.

According to Le Parisien, Barcelona are willing to pay a slightly lower fee, between 140 and 150 million euros, while also offering Croatian midfielder Ivan Rakitic as well as allowing Ousmane Dembele to return to France on loan.

However, the agent of 22-year-old French World Cup-winning winger Dembele insisted his client was not interested in being used as bait in a deal for Neymar.

"Ousmane is 100 percent staying. There is no chance of him leaving. He wants to establish himself at Barca and he will," Moussa Sissoko told French television station TF1.

Dembele has endured an injury-hit two years at the Camp Nou since being signed by Barcelona for an initial 105 million euros from Borussia Dortmund immediately after Neymar's world record 222 million-euro switch to PSG.

In Catalonia, radio station RAC1 has reported that Barcelona have taken out a loan in order to have the funds needed to pay for Neymar's transfer, having already spent 120 million euros in the close season to sign Antoine Griezmann from Atletico Madrid.

Wednesday's reports from both sides of the Pyrenees came after Barcelona director Javier Bordas had raised hopes in Catalonia on Tuesday night as he spoke to reporters after returning from a meeting with PSG counterparts.

"We are continuing negotiations, we are closer to a deal," he said.

Meanwhile, a move to Real Madrid now seems increasingly unlikely for Neymar, who took part in PSG's training session ahead of the French champions' next league game at Metz on Friday.

The 27-year-old, scorer of 51 goals in 58 appearances in his two years at PSG, has not featured for his current club this season amid the uncertainty surrounding his future.

On Tuesday, the player revealed one of his dreams had come true as he made a cameo appearance in his favourite Netflix show.

Neymar appeared in the crime drama La Casa de Papel (Money Heist) having originally been edited out pending the outcome of his rape case.

Once Brazilian police dropped their investigation last month, Netflix re-released the episodes to include the 27-year-old.