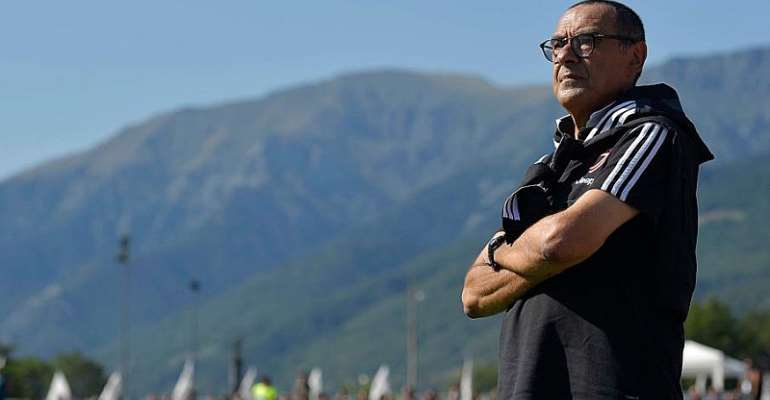 Maurizio Sarri could get the all-clear to be present for his first home clash as Juventus coach on Saturday against his former club Napoli, after missing the season-opener with pneumonia.

The eight-time defending champions' first home game of the campaign pits them against last season's runners-up.

The 60-year-old has reportedly irritated club bosses by continuing to smoke despite his health issues.

Chain-smoking Sarri was photographed holding a packet of cigarettes while posing with fans outside his home earlier this week.

Despite his condition, Sarri has still conducted training sessions, and in recent days has come out on the pitch, according to reports in Italy.

The former Chelsea manager spent three trophyless seasons with Napoli and his decision to join Juventus has been viewed as a betrayal by his former club and supporters.

Sarri's continued absence could however provide a boost for Carlo Ancelotti's Napoli, who won their opening game 4-3 against Fiorentina.

Juventus posted an uninspiring 1-0 win over Parma last weekend with Cristiano Ronaldo having a goal controversially ruled offside by VAR.

"I know Juve and I know how good they are," said former PSV Eindhoven winger Lozano. "But my new teammates are also strong.

"I also know how important it is when we play against them. I hope to get onto the pitch but that's up to the coach. I'm ready for any decision."

Juventus' close-season signing Aaron Ramsey could have to wait for his first start after skipping midweek training due to slight lower back pain.

"These direct clashes (between Juventus and Napoli) are difficult, but we often win them, we hope to continue like this on Saturday," said Juventus goalkeeper Wojciech Szczesny.

"It will be a hard-fought match."
INTER IMPRESS
Antonio Conte's new-look Inter Milan travel to Cagliari looking to continue their impressive start after 4-0 win over promoted Lecce.

Sardinians Cagliari were shocked in their opening match to promoted Brescia.

Brescia next travel to AC Milan, who crashed to a 1-0 loss at Udinese last time out.

At the Stadio Olimpico, Lazio and Roma go head-to-head in an early-season capital-city derby.

"The derby's importance is well-known for everyone here in Rome, and for us players as well," said Roma's Turkish forward Cengiz Under.

"We'll go out there and give everything we have to try and get the result we want.

"We have to get back in the Champions League."
Meanwhile, Bologna coach Sinisa Mihajlovic looks set to be on the bench again against SPAL Friday after being discharged from hospital after undergoing chemotherapy.

The 50-year-old had been hailed for his exceptional courage in attending his team's Serie A opener last weekend, in spite of his treatment for acute leukaemia.

Erectile Dysfunction Can Cause Stroke, Heart Attack - Consul...
39 minutes ago