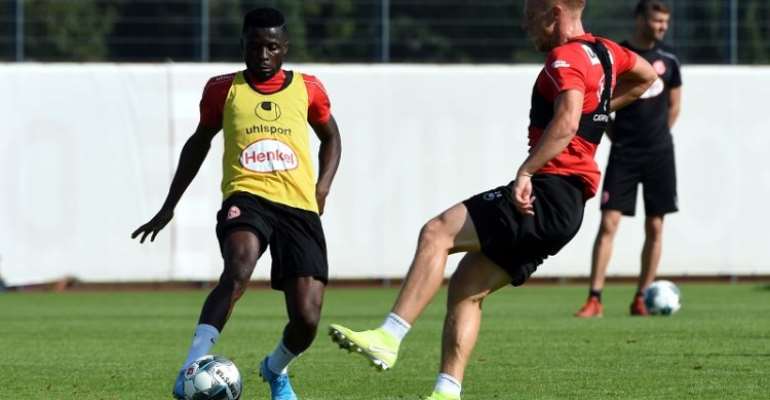 German Bundesliga side Fortuna Düsseldorf have received a massive boost following the return of Nana Ampomah to training.

The Ghanaian winger has been out of action for close to three weeks after suffering a thigh injury in a friendly.

The enterprising youngster was ruled out of action for close to a month after picking the injury in Fortuna Düsseldorf’s last friendly match before the Bundesliga kicked off.

But there seems to be good news for the Flingeraners as the influential winger has started training with the team.

Ampomah trained with the first team on Tuesday to the delight of the team but is not likely to feature for the side when they come up against Eintracht Frankfurt this weekend.

“Nana Ampomah is back in training after his fibre tear in the adductor area,” a club statement said.

“Only two weeks after his injury, he has been training with the team since Tuesday morning. The game at the Frankfurt is still too early for him,” it added.

Ampomah played much of the pre-Bundesliga friendlies for The Flingeraners but the injury kept him out of the team as he looked set for a starting role for Freidhelm Funkel.