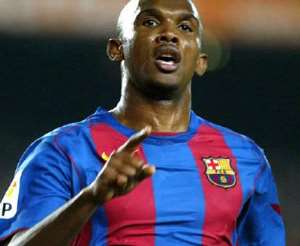 Cameroon's Samuel Eto'o was named African Footballer of the Year for the third year running on Thursday, edging out Ivory Coast striker Didier Drogba by two points in the annual poll.

Eto'o became only the second player to take the award three times in a row, matching the feat of the Ghanaian Abedi Pele in the early 1990s.

The Barcelona striker polled 108 votes to 106 for Chelsea's Drogba in the closest finish in the three decades of the award, the Confederation of African Football (CAF) announced at its annual gala in Abuja.

Ghana midfielder Michael Essien, who also plays for English champions Chelsea, finished third in the voting by the national coaches of the 52 members of CAF.

Eto'o, who flew into Abuja on a private jet hours before the event with Barcelona president Joan Laporte, dedicated his award to African children.

"My struggle lasted for so long and the more I advanced the harder it became but today I'm lucky to be a legend of African football because for three times in a row I have won this trophy," he told the audience, which included Nigerian president Olusegun Obasanjo.

Eto'o's award came after a year in which he helped Barcelona win the Spanish league title and finished third in the polling for the FIFA World Player of 2005.

The major disappointment for Eto'o was failing to qualify for this year's World Cup finals with Cameroon, a feat achieved by both Drogba and Essien.

Drogba also won the English title with Chelsea in 2005 and a League Cup winners' medal while Essien was a French champion with Olympique Lyon in 2005 and voted the best player in France by his fellow professionals at the end of last season before his move to London.

Neither Drogba or Essien attended the gala.

Only two of the other winners were on hand to accept their awards -- coach of the year Stephen Keshi who qualified Togo for the World Cup finals and women's footballer of the year, Adjoa Bayor of Ghana.

Keshi's job is in the balance after Togo's poor showing at the African Cup of Nations in Egypt where they ditched out in the first round.