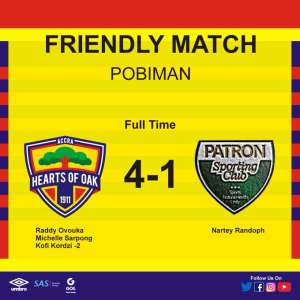 Ghana Premier League giants Accra Hearts of Oak has today posted a 4-1 win on lower division side Patron Sporting Club (SC) in a friendly encounter at the Pobiman Park.

The exercise is part of efforts by the club to give Phobian manager Kim Grant and his technical team the opportunity to assess the strength of his squad as they continue preparations for the return of the local league.

In an entertaining encounter, the Rainbow lads beat their opponent 4-1 courtesy a brace from strong striker Kofi Kordzi as well as a goal each from Michelle Sarpong and Raddy Ovouka.

Randoph Nettey netted the only consolation goal for Patron SC who played as the away side.

Hearts have now won 3 matches in the off-season with the last one coming against Rock Star FC. Their only defeat came at the hands of Black Meteors who are making preparations for their u-23 Cup of Nations qualifier against Algeria.

Up next for the former GPL Champions, they will play as guests to Asante Kotoko in the 2019 President Cup on Sunday, September 8, 2019, at the Baba Yara Sports stadium.