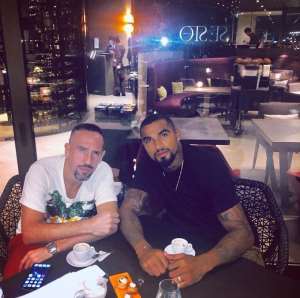 Fiorentina duo, Kevin-Prince Boateng and Franck Ribery took time out to have dinner on Tuesday evening.

The pair made their debut on Saturday defeat to Napoli in the matchday 1 in the Italian Serie A.

Boateng, 31, joined Vincenzo Montella’s side on a two year deal from Sassuolo following his torrid loan spell at FC Barcelona in the second half of last season.

However, the former France and Bayern Munich legend joined the Serie A as a free agent after ending his 12 years stay with the Bundesliga side.

This will be the first time both forwards are playing together, although they have met as opponents during Boateng’s stint in the Bundesliga.

Tuesday’s outing seems to be the first of many after the Ghana star opened his Fiorentina goal account in his first Serie A game of the 2019-20 season.

Ribery and Boateng will be hoping to help the Viola bounce back from their defeat to Napoli when they visit Genoa for their next league fixture on Sunday.